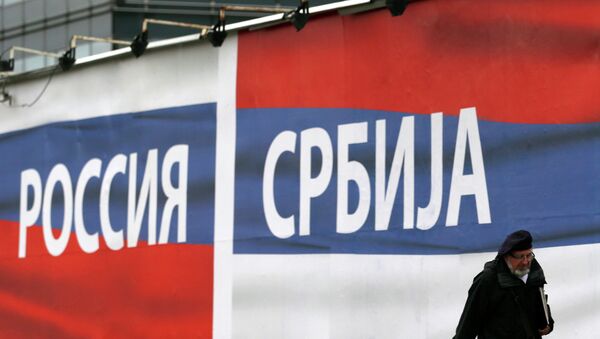 Russian President Vladimir Putin and Serbian Prime Minister and presidential candidate Aleksandar Vucic will hold a meeting in Moscow on Monday to discuss cooperation in such areas as economy, defense industry, culture and tourism.

On June 11, 2006, the Russian Foreign Ministry recognized that, following Montenegro’s declaration of independence, the Republic of Serbia would assume the international legal personality of the disbanded Serbia and Montenegro. Russia and Serbia have been maintaining a traditionally active political dialogue since then.

Both countries have held regular top-level meetings. On May 24, 2013, Putin and his Serbian counterpart Tomislav Nikolic signed a Declaration on Strategic Partnership on behalf of their nations in the Russian city of Sochi. On October 30, 2013, the Russian president received Nikolic in Moscow. During this meeting, Putin and Nikolic discussed issues of bilateral relations. On February 6-9, 2014, Nikolic visited Sochi to attend the opening ceremony of the 22th Olympic Games. On October 16, 2014, Vladimir Putin visited Serbia to mark the 70th anniversary of Belgrade’s liberation from Nazi occupation in World War II. As part of this visit, Putin met with Nikolic and Vucic.

Is EU Planning to Drive a Wedge Between Russia, Serbia?
On April 24, 2015, the Russian and Serbian presidents met in Yerevan to attend commemoration events marking the 100th anniversary of the Armenian Genocide by the Ottoman Empire. They also met on May 8-9 in Moscow during celebrations of the 70th anniversary of victory in WWII.

On March 9-10, 2016, Nikolic arrived in Moscow on a working visit, as part of which he discussed with Putin political, economic and trade cooperation as well as relevant issues on the international agenda.

During Nikolic's visit to St. Petersburg on October 12-14, 2016, the Serbian and Russian sides signed a range of cooperation agreements.

Serbia Forced to Sacrifice Territory, Relations With Russia for EU Membership
On May 15, 2015, Lavrov visited Serbia, where he was received by Nikolic and Vucic and held talks with Dacic. On December 3-4, Lavrov met with Serbian leaders again, on the sidelines of the OSCE Ministerial Council summit. The foreign ministers also meet regularly on the sidelines of international forums, including the UN General Assembly sessions.

On April 1, 2016, Dacic met with Lavrov to discuss the state and prospects of Russian-Serbian cooperation. On December 12-13, 2016, Lavrov arrived in Serbia on a working visit, during which he held meetings with Nikolic, Vucic and Dacic.

Russia and Serbia have also developed inter-parliamentary cooperation. On May 12-13, 2015, Chairman of the Federation Council of the Federal Assembly Valentina Matvienko paid an official visit to Belgrade. In December 2015, a delegation of the Serbian National Assembly, chaired by President Maja Gojkovic, visited Moscow.

The Russian-Serbian dialogue has traditionally been focused on supporting peace and stability in the Balkans, mainly in terms of settling the issue of Kosovo. Russia has continuously assisted Serbia in defending its sovereignty and territorial integrity. The Serbian authorities, despite positioning themselves for EU membership, refused to impose sanctions against Russia and are remaining disengaged in the events in Ukraine.

Serbia 'Playing a Very Smart Game' in Relations With Russia, EU
Both countries have developed trade and economic relations. According to the Russian Federal Customs Service, the 2014 bilateral trade amounted to $2.1 billion, which is a 7.6 percent increase on 2013. According to Serbian estimates, trade has since increased by 13 percent in monetary terms to exceed $3.3 billion.

The restrictions on the import of EU agricultural products, imposed by Russia in response to the Western sanctions, have created conditions for an increase in similar shipments from Serbia. In 2014, imports of Serbian agricultural and food products grew by 70 percent in monetary terms as compared to 2013, equaling $370 million.

In 2015, unfavorable market conditions forced some Serbian companies to reduce their exports to the Russian market, resulting in a subsequent reduction in bilateral trade. According to the Federal Customs Service, the Russian-Serbian external trade amounted to $1.01 billion in January-August 2015, which is less than in the similar period of the previous year. Russia’s total investment in the Serbian economy, including investment via third countries, reached $3.9 billion, as of late 2014.

In 2016, Russian-Serbian turnover amounted to $1.6 billion, which is 1.32 percent more than in 2015. However, Russia's export to Serbia decreased by 9.3 percent and totaled $770 million, while Russian import increased by 12.8 percent to $886.8 million, according to the Russian Federal Customs Service.

An example of successful cooperation between the two nations is the Naftna Industrija Srbije (NIS) oil and gas company reconstruction and development project, in which Russia's Gazprom Neft is the major shareholder and investor. A project for the reconstruction and modernization of Serbian railways, involving Russia's JSC RZD railway company, within the framework of an agreement to provide state export credit to Serbia in the amount of $800 million, has considerably contributed to the recovery of the Serbian economy.

Serbian Presidential Candidate Aims to Kick-Start Economy With Russian Help
Cultural and humanitarian ties are an important area of cooperation. In August 2014, the restored Russian Necropolis opened in Belgrade. In September 2014, the Serbian capital hosted joint commemoration events to mark the 100th anniversary of the start of WWI, under the auspices of Russian non-governmental organizations, the Foundation of St. Andrew the First-Called and the Center of National Glory. In September-November 2014, the Russian Ministry of Culture held the Days of Russian Spiritual Culture in Serbia.

In 2015, Russia was the honorary guest at Belgrade’s book fair. Russia has repeatedly provided Serbia with humanitarian assistance, including on mine clearance. In 2012, the emergency response Russian-Serbian Humanitarian Center was opened in the Serbian city of Nis.

The official visit of Patriarch Kirill of Moscow and All Russia to Serbia on November 14-16, 2014 confirmed the close historic relations and spiritual bonds that exist between Moscow and Belgrade.