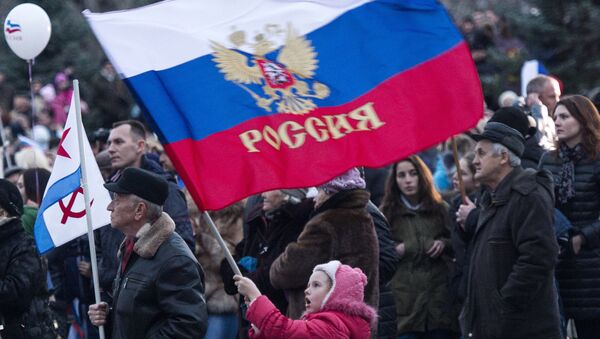 Kremlin spokesman Dmitry Peskov said in an interview with the RBC media outlet that Crimean reunification with Russia was a rescue of Crimean people adding that Russia copes with negative consequences of western sanctions.

MOSCOW (Sputnik) – On Saturday, Crimea celebrated the third anniversary of the reunification with Russia. According to local authorities, more than 14,000 residents of Simferopol took part in celebrations. Festive events also took place in other Crimean cities including Sevastopol.

“The developments in Crimea are not a victory, you know. That is a historical shift that is maybe a rescue of the whole nation. Reunification of people with their country. And we are paying the price for that,” Peskov said.

Moscow Fireworks Mark Third Anniversary of Crimea’s Reunification With Russia
He pointed out that the burden of western sanctions was not critical for the Russian economy adding that the restrictive measures even had some positive consequences.

“You know there are positive sides concerning import substitution that really begins to work in agriculture, labor productivity,” Peskov added.

Crimea rejoined Russia in March 2014 after the referendum held on March 16, with almost 97 percent of the residents having voted for the reunification. Ukraine still considers Crimea as an occupied territory.