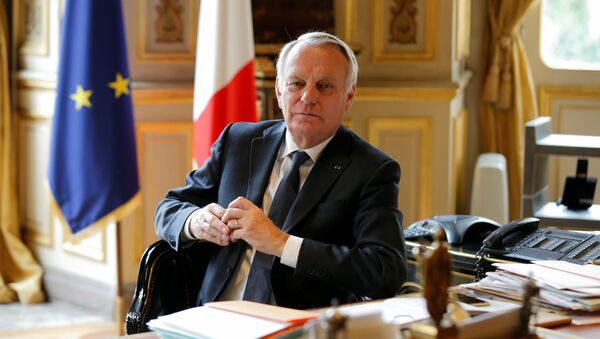 PARIS (Sputnik) — The minister noted that the French authorities allowed Turkish Foreign Minister Mevlut Cavusoglu to hold a campaign meeting in France’s northeastern city of Metz due to the absence of threat to the public order, adding that Turkish rallies in France should be held in accordance with the laws and values of the country.

"It is unacceptable when people use such words as 'fascism' or 'Nazism' because they [these words] are very aggressive," Ayrault said at a press conference in Stockholm with his Swedish counterpart Margot Wallstrom as quoted by the Ouest France newspaper.

Dutch-Turkish Tensions Mount as Erdogan Brands Netherlands 'Banana Republic'
On Saturday, the Dutch authorities refused landing for Cavusoglu, who was expected to meet with the Turkish expats in the Netherlands in the run up to mid-April's Turkish constitutional referendum on bolstering the president's powers. On the same day, Turkish Family and Social Affairs Minister Fatma Betul Sayan Kaya decided to travel to the Netherlands, but was denied entry to the Turkish consulate in Rotterdam.

Similarly, on March 5, Erdogan compared the German authorities and Nazis criticizing Berlin for banning Ankara’s campaign rallies on the German soil, including the event in the city of Gaggenau, ahead of a crucial vote on the constitutional reform in Turkey.