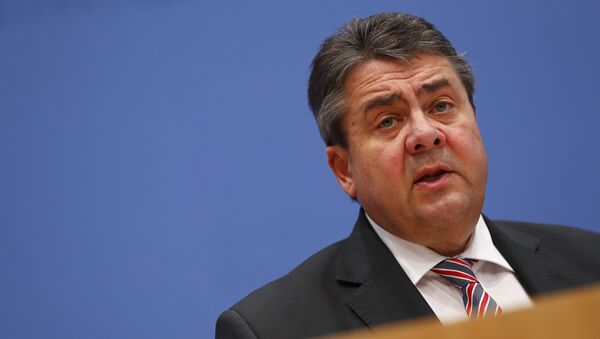 "We agreed to continue our dialogue as soon as possible. Today's negotiations bring us to better relations step by step. Honest, fair, open, partner and friendly relations between our country should remain our objective," Gabriel said after the meeting with his Turkish counterpart Mevlut Cavusoglu.

The German foreign minister called for decent behavior amid the recent statements of Turkish officials, since "political disagreements from Turkey should not be imported to Germany." Gabriel also asked for a consular access to Turkish-German journalist Deniz Yucel detained in Turkey, what had been earlier promised by the Turkish prime minister.

Turkey Accuses Germany of Aiding Its Enemies
The relations between Berlin and Ankara became strained after Yucel was arrested in Istanbul in February over alleged links to a terrorist organization and terrorist propaganda.

The situation deteriorated further as Turkish President Recep Tayyip Erdogan compared on Sunday the German authorities with Nazis for banning Ankara’s rallies supporting the Turkish constitutional reform in Germany. On Monday, the Hamburg authorities canceled the appearance of Cavusoglu over fire safety issues scheduled for Tuesday at a pre-referendum campaign rally, while he delivered a speech at the country's consul in Hamburg urging Germany not to "lecture" Ankara. On March 2. the authorities of the city of Gaggenau banned a pre-referendum rally of Turkish Justice Minister Bekir Bozdag.