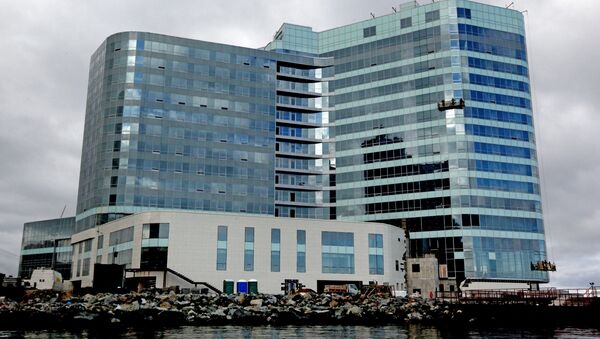 © Sputnik / Vitaliy Ankov
/
Go to the photo bank
Subscribe
The five-star hotel "Hyatt Burny Vladivostok," located in Russia's Far East near the border with China, will be sold in an auction scheduled for June 8. Chinese companies are said to be most likely potential buyers of the property object.

German Hotel Owner Blames ‘Mom’ for Anti-Semitic Booking Policy
Hyatt Burny Vladivostok is one of two five-star Hyatt hotels in Vladivostok whose construction began the building of which started in the wake of APEC Summit 2012. However, the construction works financed from the federal budget have not been completed.

Last year, the local authorities decided to sell one of the hotels and finish the construction of the other five-star giant, the Hyatt Regency Vladivostok, with the budget money.

Hyatt Burny Vladivostok is located at Cape Burny, in a quiet area, but only 10 minutes away from downtown. The location is convenient both for business and recreational tourism. The hotel consists of 216 rooms and a vast spa complex with a total area of 2,600m2.

According to CEO of the Russian auction house Andrey Stepanenko, the hotel is almost finished. The object is well preserved and is being kept in good condition, he said in an interview with Sputnik.

He also noted that the starting price of the object has not yet been defined.

"The assessment of the [market value] of the object is being made by Ernst & Young — one of the "Big Four" consulting companies. We hope to receive its report in the coming month. Then we will know more about the starting price," Stepanenko said.

In the expert's opinion, finding a buyer shouldn't be a problem.

"Vladivostok is lacking good hotels. There is a boom in business activity in the city and in the Far East region in general. However, businessmen who come to the region simply have no place to live in. Vladivostok, with its population of over 600,000, has only one five-star hotel — the Hyundai. The hotel complex at Cape Burny will be able to fill the vacant niche," Stepanenko noted.

According to the expert, Chinese companies are expected to take part in the auction as they have repeatedly expressed their interest in the object. Other potential buyers could be investors from South Korea, who continue their search for profitable assets in Russia.

000000
Popular comments
"The assessment of the [market value] of the object is being made by Ernst & Young — one of the "Big Four" consulting companies. -- It should also be mentioned, the SAME "big four" who signed off on junk bonds (calling them high-quality A, and other fraudulent practices that brought us the 2008 crash.
jas
11 February 2017, 21:09 GMT
000000
so what has hyatt to do with the hotels? Are they to run them?
michael
11 February 2017, 23:47 GMT
000000
Newsfeed
0
New firstOld first
loader
LIVE
Заголовок открываемого материала
Access to the chat has been blocked for violating the rules . You will be able to participate again through:∞. If you do not agree with the blocking, please use the feedback form
The discussion is closed. You can participate in the discussion within 24 hours after the publication of the article.
To participate in the discussion
log in or register
loader
Chats
Заголовок открываемого материала
Worldwide
InternationalEnglishEnglishMundoEspañolSpanish
Europe
DeutschlandDeutschGermanFranceFrançaisFrenchΕλλάδαΕλληνικάGreekItaliaItalianoItalianČeská republikaČeštinaCzechPolskaPolskiPolishСрбиjаСрпскиSerbianLatvijaLatviešuLatvianLietuvaLietuviųLithuanianMoldovaMoldoveneascăMoldavianБеларусьБеларускiBelarusian
Transcaucasia
ԱրմենիաՀայերենArmenianАҧсныАҧсышәалаAbkhazХуссар ИрыстонИронауОssetianსაქართველოქართულიGeorgianAzərbaycanАzərbaycancaAzerbaijani
Middle East
Sputnik عربيArabicArabicTürkiyeTürkçeTurkishSputnik ایرانPersianPersianSputnik افغانستانDariDari
Central Asia
ҚазақстанҚазақ тіліKazakhКыргызстанКыргызчаKyrgyzOʻzbekistonЎзбекчаUzbekТоҷикистонТоҷикӣTajik
East & Southeast Asia
Việt NamTiếng ViệtVietnamese日本日本語Japanese中国中文Chinese
South America
BrasilPortuguêsPortuguese
NewsfeedBreaking
03:38 GMTIsrael Approves $1.5Bln Budget for Possible Strike Against Iran's Nuclear Facilities - Report
03:00 GMT’Karen in the Air’: Watch Woman Preach About Pandemic Via Microphone During Midflight
02:27 GMTIt's Ye, Not Kanye: Rapper Kanye West Officially Changes His Name
01:38 GMTPowell Embraced His Caribbean Roots Throughout Career, Kept Rum in Cabinet, Jamaican Envoy Says
01:25 GMTDPRK Fired One Ballistic Missile Towards Sea of Japan, South Korean Media Report
01:13 GMTNYC Commission Votes to Remove Thomas Jefferson's Statue From City Hall Over Complaints
YesterdayPolisario’s Brahim Ghali Vows to Fight Morocco in Western Sahara Until UN Holds Independence Vote
YesterdayUS Afghan Envoy Zalmay Khalilzad Steps Down
YesterdayHezbollah Leader Declares Group Has 100,000 'Trained & Experienced' Fighters - Report
YesterdayUS Large Planes, Early Warning Assets Now More Vulnerable, Pacific Air Forces Chief Says
YesterdayEx-Top Brazilian Diplomat Calls for G20-Led Multipolar World to Tackle Post-COVID Issues
YesterdayBig Tech in 4-Day Winning Streak on Wall Street Sparked By Earnings Bets
YesterdayTrump Says Assault on Protesters Claims ‘Baseless Harassment’ After Hours of Deposition
YesterdayUS January 6 Committee Rejects Steve Bannon’s Refusal to Cooperate in Probe - Reports
YesterdayState Dept. IG Launches Probe Biden's Withdrawal From Afghanistan - Reports
YesterdayScottish Police Reports Powerful Blast in Residential Building in Country's Southwest
YesterdayMoscow Expresses Condolences Over Powell's Death, Says He Was 'A Patriot of His Country'
YesterdayProduction of Russia's Sputnik V in Mexico to Begin in Second Half of November - Reports
YesterdayTreasury to Use ‘Extraordinary Measures’ Through December 3 to Avoid Debt Ceiling
YesterdayTop 10% of Richest Americans Own About 90% of Stocks on US Markets - Report