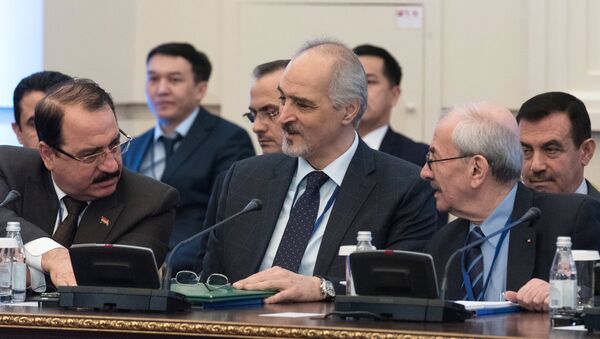 DAMASCUS (Sputnik) — Earlier in the day, Assad held a meeting with a group of Russian lawmakers in Damascus.

"Today, it was voiced for the first time that the Syrian president supports the Astana talks and calls them effective and favorable," Sablin told reporters after the meeting.

Meanwhile, a deputy from Russia's lower house of parliament said Assad considers the Syrian talks in Astana to be more productive than the Geneva format.

"He [Assad] believes that the resumption of talks in Astana… will be more productive not only for the expansion of the local truce, but also for mechanisms of disarmament and political reconciliation through humanitarian mechanisms than the current Geneva format," Sergey Gavrilov told reporters.

Astana Talks on Syria Are 'a Step Toward Decent Peaceful Solution'
The intra-Syrian peace talks were held in Kazakhstan's capital of Astana on January 23-24, resulting in Moscow-Tehran-Ankara agreement on establishment of a trilateral mechanism to monitor the ceasefire in Syria.

The talks brokered by Russia, Iran and Turkey brought together the representatives of the Syrian government and the armed opposition groups for the first time since the beginning of the Syrian war in 2011.

He said "I do not rule out" that members of the Parliamentary Assembly of the Council of Europe (PACE) could also join the Russian-EP delegation.

Earlier this month, Belgian lawmakers visited Syria and held a meeting with Assad.