Sputnik has obtained the full text of the Syrian draft constitution proposed by Russia.

Syrian Kurds Welcome Russia's Proposed Draft Constitution for Syria
Last week, a draft Syrian constitution, prepared by Russian experts, was presented to the Syrian opposition during the settlement talks in the capital of Kazakhstan. Head of the Russian delegation Alexander Lavrentyev underlined that Russia is not interfering in the consideration of the constitution but is presenting the draft to the opposition simply in order to accelerate the process.

According to the document obtained by Sputnik, the Syrians have declared their intention to "ensure security, independence, sovereignty and territorial integrity of the state; live in peace and friendship with other peoples to successfully establish a civil society; build a legal democratic state governed by the rule of law as expressed by the will of its people; ensure a decent standard of living for all in accordance with a just economic and social order."

According to the document proposed by Russia, Syria may adopt the draft constitution after a nationwide referendum on the issue is held. 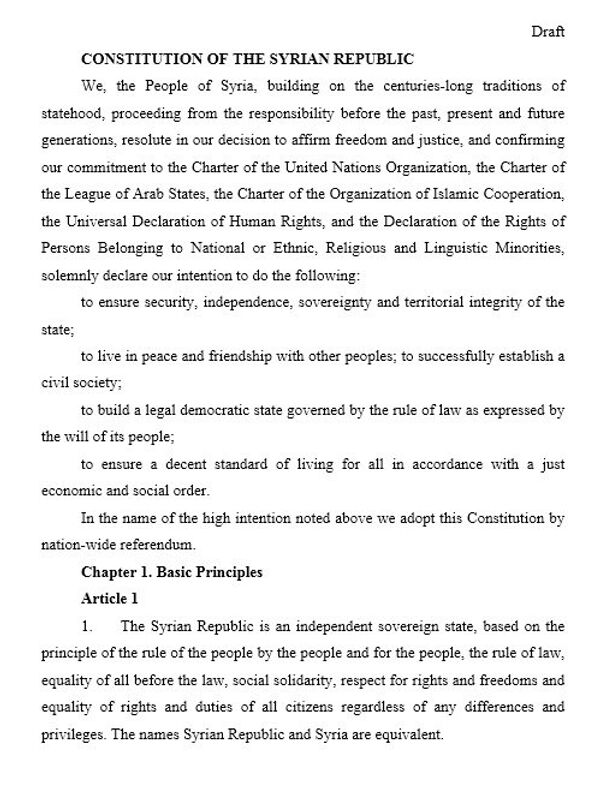 The draft constitution removes the word "Arab" from the official name of the country.

The draft constitution proposed by Russia envisages that Syria respects all religions and suggests equality of all religious organizations before the law.

According to the document, Arabic is the official language of the Syrian Republic, while "Government agencies and organizations of the Kurdish cultural autonomy shall use Arabic and Kurdish equally."

"Each region shall have the right to use another majority language in addition to the official language as is regulated by the law, if such use was approved by a locally held referendum," the draft constitution reads.

The political system of the Syrian state "shall be based on the principle of political pluralism, and exercising power democratically by secret ballot."

Moreover, "Ideological diversity shall be recognized in Syria, no ideology shall be proclaimed as State ideology or as obligatory."

"The [Syrian] State shall ensure security and protect the rights and freedoms of national and religious minorities."

'Neutral and Balanced' Syrian Draft Constitution Respects Gov't and Opposition
According to the draft constitution proposed by Russia, Syria denounces terrorism in all its forms and will ensure the protection of its territories and population against terrorist threats.

"Syria denounces war as an infringement on other countries' sovereignty and a means to resolve international conflicts," the document reads, adding that the Syrian army is prohibited to perform "military or militarized activity outside the domain of state power."

The draft constitution says that the territory of Syria is "indivisible, inviolable and integral," while "state borders may be changed only after a referendum among all Syrian citizens."

According to the text of the Russia-proposed draft Syrian constitution obtained by Sputnik, the "legislative authority is assumed on behalf of the Syrian people by the People's Assembly and the Constituent Assembly in the manner prescribed by the Constitution and applicable laws."

"Members of the People's Assembly shall be elected by the public, secret, direct and equal vote."

The draft constitution proposes a four-year People's Assembly term from the date of the first meeting.

Syrian Constitution Must Be Adopted by Syrian People – Russian Defense Ministry
All Syrians who are 18 years old and older, and meet the conditions stipulated in the Election Law, can vote.

The Election Law will include provisions that ensure "the freedom and safety of voters, the right to choose their representatives and the integrity of the electoral procedures; the right of candidates to supervise the electoral process; liability for those who abuse the will of the voters; identifying the regulations of financing elections campaigns; organization of the election campaign and the use of media outlets."

According to the document, the People's Assembly is allowed to approve laws; call an election of the Syrian President; perform a vote of no-confidence to the government; ratify international agreements; approve international treaties and agreements, as well as grant privileges to foreign companies; approve general amnesty, and decide whether to terminate the mandate of an Assembly member.

"The President of the [Syrian] Republic is the guarantor of the independence, unity and territorial integrity of the country," according to the document.

According to the draft constitution proposed by Russia, the Syrian President is elected for the term of seven years by Syrian nationals "on the basis of universal, equal and direct suffrage by secret ballot."

The President of Syria is not allowed to hold the office for more than two consecutive terms, according to the document. 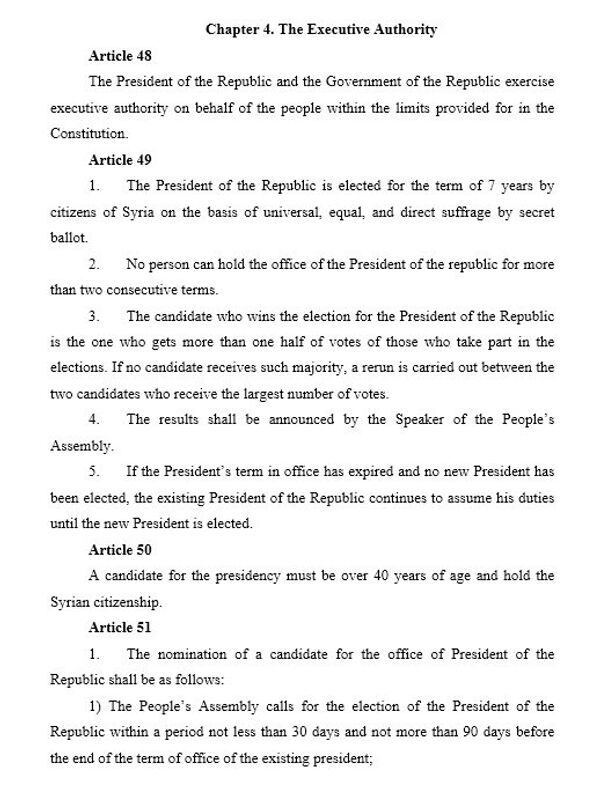 To be elected as the president of the country, a Syrian citizen, who must be over 40 years old, must receive more than one half of votes. If no candidate receives a majority of votes, a rerun will be carried out between the two candidates who receive the largest number of votes.

Russia-Proposed Draft Syrian Constitution 'Invitation to Discuss Syrian Future'
The Syrian President is also the Commander in Chief of the Armed Forces, according to the draft constitution.

"The President of the [Syrian] Republic may be removed from office by the Constituent Assembly only after the People's Assembly brings against him charges of high treason or another grave crime, and the legality of such charges and of the procedure for bringing them up have been confirmed in the Supreme Constitutional Court's resolution," the draft constitution proposed by Russia reads.

The full text of the constitution has been made available to Sputnik.