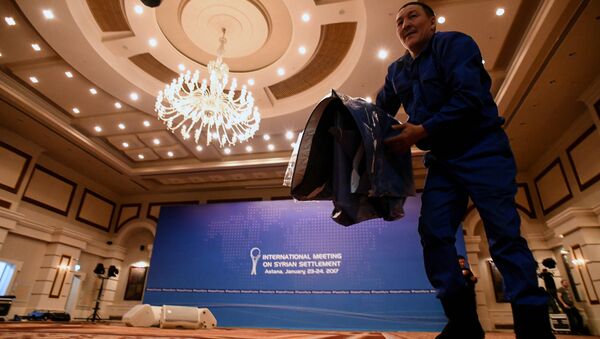 ASTANA (Sputnik) — The delegations of Russia, Iran and Turkey have managed to bring closer their positions on Syria settlement, Russia's special presidential envoy on the Syria settlement, Alexander Lavrentiev said Sunday, adding that preparations for Astana talks were going intensively.

"Preparations are going rather intensively. Today we managed to hold consultations with the Iranian and Turkish sides, to have discussions in trilateral format and bring closer our positions on most of the issues on agenda," Lavrentiev said.

The work on the final document for the intra-Syrian negotiations in Astana is still ongoing, according to Russian delegation head.

"Work on the final statement is still ongoing, you will hear everything tomorrow," Lavrentiev said.

"We have had good consultations with de Mistura today and we have his total understanding and readiness to provide cooperation in achieving good actual results. Lets hope for the best and wait until tomorrow," Lavrentiev added.

Russia will hold further consultations with Syrian government and armed opposition in Astana.

"Negotiations with the Syrian delegation headed by the Syrian representative in the United Nations Jaafari are set for today, after which the meeting with the Syrian armed opposition will take place," Lavrentiev said.

The Astana talks on Syrian settlement will start in the hotel Rixos President Astana at 07:00 GMT on Monday and are expected to end at 07:00 GMT on Tuesday. The negotiations brokered by Russia, Turkey and Iran will be held behind closed doors.