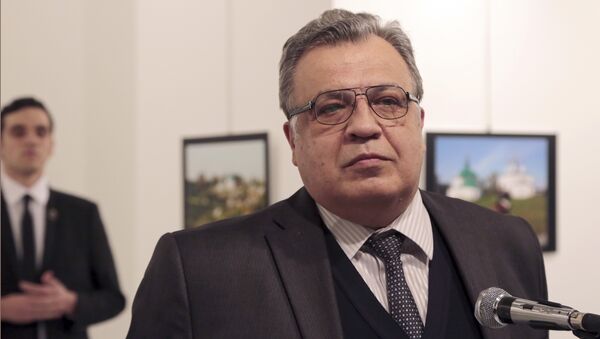 © AP Photo / Burhan Ozbilici
Subscribe
Russian diplomats will not give up in striving for peace and working to prevent conflicts around the world despite the murder of Russian Ambassador to Turkey Andrey Karlov, Russia's envoy to Paraguay Nikolay Tavdumadze told Sputnik on Wednesday.

MOSCOW (Sputnik) — On Monday, Turkish police officer Mevlut Mert Altintas shot Karlov at an art gallery exhibition opening in Ankara. Karlov died from the gunshot wounds. The Russian Foreign Ministry described the attack as an act of terrorism. The gunman was killed at the scene by the police.

"No one is planning to give up, on the contrary, all our diplomats will with renewed energy strive to achieve the set goals, to lay the foundations for peace and mutual understanding, as well as aiming to prevent potential conflicts, including those in the Middle East," Tavdumadze said.

The ambassador stressed that those behind the attack failed to understand that diplomats are the ones seeking to build bridges rather than sow conflict. Tavdumadze also recalled that the extraordinary murder of a Russian diplomat is the first to take place since the 1920s.

The previous murder of a Soviet diplomat took place in 1927, when the Soviet Union's representative in Poland Pyotr Voykov was killed by a monarchist in Warsaw.

Russian Envoy to Bolivia Says Karlov's Murder Won't Derail Syrian Settlement
Replying to a question on whether the Russian embassy in Paraguay had stepped up security measures after Monday's incident in Turkey, the diplomat said the situation is being monitored but the mission has so far encountered only compassion and condolences over the murder of a colleague.

Monday's incident in Ankara sent shockwaves throughout the global diplomatic community, prompting foreign ministries and diplomats to condemn the attack in the strongest terms. A number of embassies worldwide, including the US embassy in Ankara and the Turkish embassy in Moscow, have stepped up security measures. On Tuesday, the Kremlin said Russia was taking steps to protect its diplomatic missions abroad.