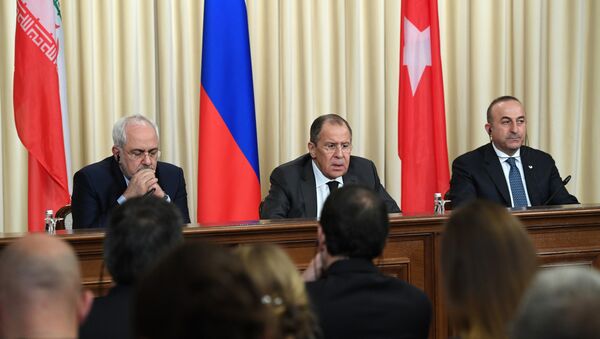 The foreign ministers of Russia, Iran and Turkey - Sergei Lavrov, Mohammad Javad Zarif and Mevlut Cavusoglu - are holding a joint press conference in Moscow after meeting on Syria.

Russia, Turkey and Iran agree that there is no military solution to the Syrian crisis, Russian Foreign Minister Sergei Lavrov said Tuesday.

Russia, Turkey and Iran adopted a joint statement on coordinated actions aimed at reviving political process in war-torn Syria during talks in Moscow.

"It is our common view that there is no military solution to the Syrian crisis," Lavrov said at a joint press conference with Turkish Foreign Minister Mevlut Cavusoglu and Iranian Foreign Minister Mohammad Javad Zarif.

According to Lavrov, the statement reaffirms the respect of sovereignty, independence and territorial integrity of Syria as a multi-ethnic, democratic and secular state.

The foreign ministers of Iran, Russia and Turkey noted the importance of the expansion of the ceasefire regime in Syria following talks in Moscow, Russian Foreign Minister Sergei Lavrov said.

"The ministers agreed on the importance of expansion of the ceasefire regime, the unimpeded access of humanitarian aid and the free movement of the civilian population across Syria. We express our readiness to contribute to the development of the agreement being drafted, negotiations on which are being held between the Syrian government and the opposition, and to become its guarantors," Lavrov told reporters.

"I think the most effective is the format that you see now. It is not an attempt to cast a shadow on the efforts of all our other partners to achieve progress in the settlement of the Syrian crisis, it is simply a statement of the fact," Lavrov said after a meeting with the foreign ministers of Iran and Turkey in Moscow.

"To date, the format of the Russia-Iran-Turkey 'troika' proves its relevance at least by practical deeds," he said.

At the same time, Russia, Iran and Turkey do not avoid contacts with other countries, invite the to join the Syrian settlement process, the Russian foreign minister added.

We cannot ignore work carried out by Russia and the United States on Syria. But the international group for Syria support failed to play its role in inmplemetation of decisions on Syria.

Russia and the US reached some agreements on Syria in September, but Washington could not confirm its participation in reached agreements, Lavrov said.

Joint actions of Russia, Turkey and Iran have made it possible to evacuate most civilians from eastern Aleppo, Lavrov said. He also expressed hope that Aleppo evaqcuation will be completed in 1-2 days.

"Russia, Iran and Turkey have been recently taken coordinated steps that allowed safe evacuation of the majority of civilian population from eastern Aleppo with support of the International Committee of the Red Cross and the World Health Organization,"  Lavrov said at a joint press conference with Turkish Foreign Minister Mavlut Cavusoglu and Iranian Foreign Minister Mohammad Javad Zarif.

"The evacuation is close to be complete, and we are hoping that it is a matter of a couple of days at the maximum," Lavrov said.

The meeting of the Russian Federation, Turkey and Iran in Moscow is crucial for the settlement of the Syrian crisis, Turkish Foreign Minister Mevlut Cavusoglu said Tuesday.

"You can't turn a blind eye to the support of the terrorists from abroad," Sergei Lavrov said. There is no country in the world who can be able to avoid terrorist threat.

"Al Nusra Front is definitely a terrorist group blacklisted in many countries. Russia makes a great efforts in Syria and its absolutely unacceptable to support this group and its branchs," Lavrov said.

Russian Foreign Minister Sergey Lavrov said Tuesday that he agreed with his Iranian and Turkish counterparts, Mohammad Javad Zarif and Mevlut Cavusoglu, to continue cooperation to resolve the Syrian crisis.

"We have the conviction that in the conditions when the implementation of the UN Security Council resolution is stalled, enthusiastic actions of our three countries will help to overcome the deadlock in the efforts on the Syrian settlement on the basis of the Security Council resolution and help to move processes in regard to the cessation of violence, and in regard to the delivery of humanitarian aid, as well as creation of conditions for an inclusive, effective political process," he said.

Lavrov said Iran, Russia and Turkey also reaffirmed "their determination to jointly fight the IS [Islamic State terrorist organization] and al-Nusra [Nusra Front] and separate from them armed opposition groups."