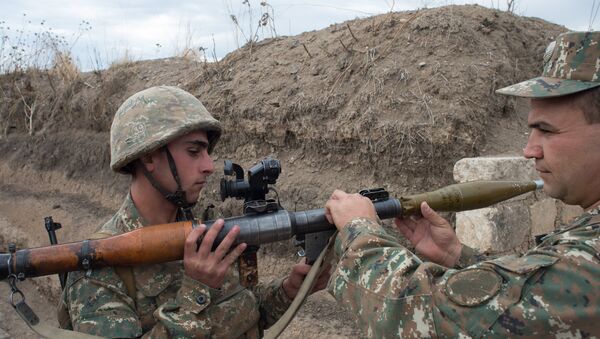 © Sputnik / Iliya Pitalev
/
Go to the photo bank
Subscribe
Current situation in Nagorno-Karabakh is dangerous and the conflict may escalate at any moment, Azerbaijan’s Foreign Minister Elmar Mammadyarov said on Thursday.

BAKU (Sputnik) – The foreign minister added that recent statements of Armenian authorities gave no reason for optimism and indicated Armenian unwillingness to engage in constructive talks.

"The April escalation of the conflict was a vivid reminder that today’s situation existing on the line of contact of Armenia and Azerbaijani troops is dangerous and has a potential to worsen at any time with unpredictable consequences," Mammadyarov said at the 23rd Ministerial Council of the Organization for Security and Co-operation in Europe (OSCE) in Hamburg.

He pointed out that Azerbaijan was the most interested party in changing the current state of affairs.

"In this context, we assess the high-level substantive discussions in Vienna and St. Petersburg as positive steps in the right direction and we are thankful to the co-chair countries, particularly to the Russian president, Mr. Vladimir Putin, for all his efforts in this regard," Mammadyarov emphasized.