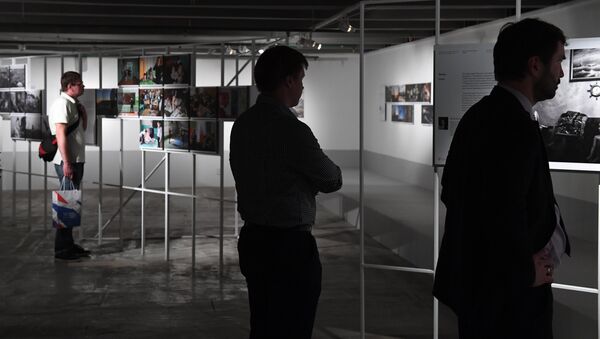 © Sputnik / Valeriy Melnikov
/
Go to the mediabank
Subscribe
International
India
Africa
Letizia Renis, an Italian girl with cerebral palsy who was the main character of the photographs that received Grand Prix at the 2016 Andrei Stenin International Press Photo Contest, has arrived in Moscow within the framework of her international trip, the Rossiya Segodnya International Information Agency's press service said Monday.

Andrei Stenin Photo Contest Winners to Be Displayed at FotoIstanbul-2016
MOSCOW (Sputnik) – Russians first learned about Renis, when her compatriot, Danilo Garcia Di Meo, was proclaimed the best young photographer at the 2016 Stenin contest organized by Rossiya Segodnya for the series titled "Letizia, A Story of an Invisible Life".

"I would like to live as independently from others as possible. But most of all I would like to find true love, to love and to be loved!" Letizia shared her dreams at a press conference in Rossiya Segodnya.

Renis' condition was caused by lack of oxygen during her birth. She cannot talk and has no control of her body. What she controls best is her head and eyes. The 32-year-old can communicate through a sensor at the back of her head and a computerized wheelchair with sensors in the headrest. With their help she learned how to use a computer and a smartphone to write messages and make video calls.

The idea to invite the girl to Moscow came from Russian Foreign Ministry Spokeswoman Maria Zakharova, who noted that "the only thing or, more precisely, person missing on the opening night was the girl who inspired the Italian photographer," and stressed she was glad that Renis would be able to see Moscow now.

Andrei Stenin International Photo Contest 2016 Winners Go on Display in Moscow
The Andrei Stenin International Press Photo Contest is held by Rossiya Segodnya under the patronage of the Russian Federation’s Commission for UNESCO. It aims to promote young photographers and attract public attention to photojournalism and its mission. It gives a chance to talented young photographers who are open to everything that is new and who attract our attention to people and events.

The 2016 contest was the largest ever since its establishment. The jury had to choose from among 6,000 entries by young photojournalists from 71 countries, including Russia. The contest covers five continents, stretching from Europe and North and South America to Africa, Australia, the Middle East and Southeast Asia. Russian participants come from all parts of the country – from Kaliningrad, Moscow and St. Petersburg in the west to Vladivostok in the Far East and Yalta in the south.