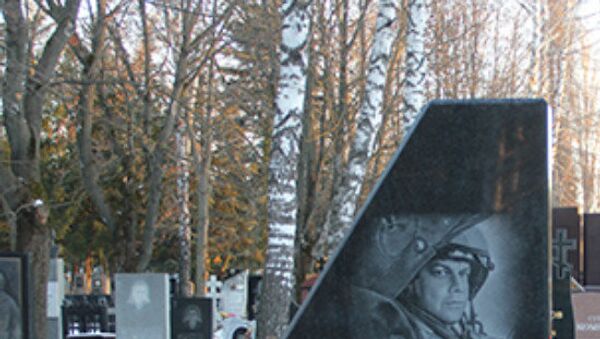 A monument to the late Lt.Col. Oleg Peshkov, Russian combat pilot killed in action in Syria, was opened in the city of Lipetsk.

The monument was erected exactly one year since Peshkov’s tragic demise during a combat mission conducted as part of the ongoing Russian military operation in Syria.

The opening ceremony was presided over by Maj. Gen. Andrei Kazakevich, Deputy Commander of the Russian Aerospace Forces, head of the regional administration Oleg Korolev and Elena Peshkova, the widow of the slain pilot.

"We all try to cope with the fact that he’s no longer with us. He was a model for his comrades-in-arms and for younger generation. Let the memory of Hero of Russia Oleg Peshkov live on, and let us be worthy of that memory," Korolev said, according to RIA Novosti.

Peshkov’s Su-24 attack aircraft was shot down over Syria on November 24, 2015 by a Turkish F-16 fighter jet for allegedly violating Turkey’s airspace. Colonel Peshkov was killed by small arms fire from the ground when he and his co-pilot were parachuting to the ground. Peshkov was posthumously awarded the title of the Hero of Russia.