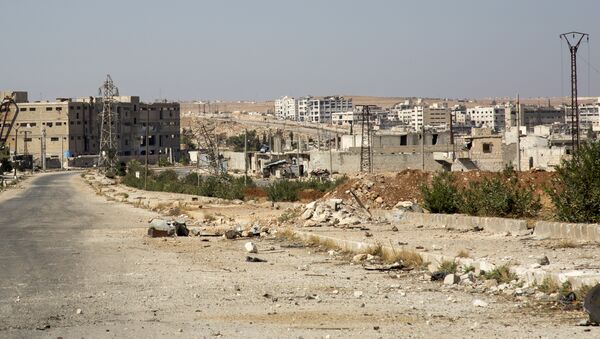 © AFP 2023 / KARAM AL-MASRI
Subscribe
International
India
Africa
Civilian population of the northern Syrian city of Aleppo could not have used the opportunities provided by the so-called humanitarian pause because terrorist groups operating in the city prohibited them from doing so, Syrian Foreign Minister Walid Muallem said Friday.

Syria Ready to Resume Truce If Gets Guarantees of Evacuation From Aleppo
MOSCOW (Sputnik) — On October 27-29, Muallem is visiting Moscow, where he is having a number of meetings and discussing the ongoing Syrian conflict.

"We have made a decision on [the introduction of] the humanitarian pause in Aleppo and prohibited flights of Syrian and Russian aviation and this prohibitions are still in force. But the terrorists from the Nusra Front and Ahrar al-Sham have threatened the civilians, who wanted to leave Aleppo and to use [opportunities provided by] the ceasefire. We have introduced a humanitarian truce, but the civilians were not able to use it," Muallem told journalists after a bilateral meeting with Russian Foreign Minister Sergey Lavrov.

Last Thursday, Russia introduced a humanitarian pause in Aleppo, which ended on Saturday, to ensure the safe evacuation of unarmed militants and civilians from the city’s eastern districts through designated corridors. The terrorists based in the city attacked civilians as they tried to flee Aleppo during the humanitarian pause.