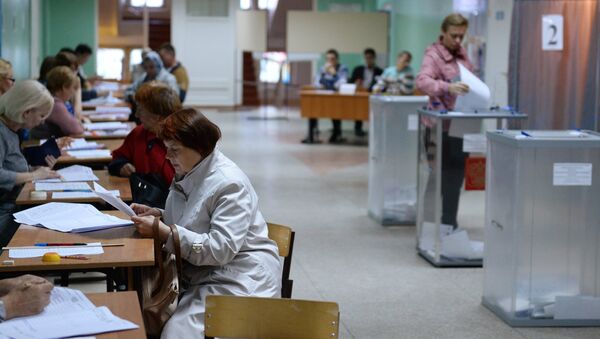 © Sputnik
/
Go to the photo bank
Subscribe
The Kremlin would welcome a higher turnout at the Russian parliamentary elections, but cannot call it low as it is comparable to an average turnout in the European states, Kremlin spokesman Dmitry Peskov said Monday.

MOSCOW (Sputnik) — On Sunday, the Russians cast their ballots to elect the State Duma, the lower house of the country’s parliament. Turnout at the elections, was estimated by Russia's Central Election Commission at 47.81 percent.

"Of course, a higher turnout would be welcomed, but there is no need to downplay the importance of the numbers [on turnout], we are having at the moment. It cannot be called low, you know that in a majority of the European states, the turnout is much lower and it reflects the reality, the proportion of politically active population, which traditionally participates in the election process," Peskov said, answering a question about Russian President Vladimir Putin's view on the turnout.

United Russia Wins Parliamentary Poll With 54.28% After 93% Ballots Counted
The Kremlin is confident that Russia's Central Election Commission (CEC) will respond to all the reported violations during the elections to the State Duma, Peskov said.

On Sunday, CEC chair Ella Pamfilova said that the elections were legitimate and the number of violations had been significantly lower than in previous elections.

"CEC chair Ella Pamfilova said that the measures in response to all the violations would be taken. There is a certain procedure of an appeal and filing complaints to the CEC, and there is no doubt that the measures will be taken to respond to the allegations [of violations]," Peskov said.