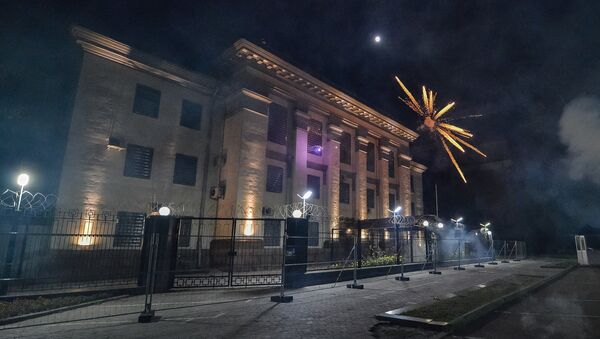 Ukraine's law enforcement agencies will step up security measures near the Russian diplomatic missions in the country amid Sunday's Russian parliamentary elections, the spokesman for the National Police of Ukraine said Saturday.

Russian Embassy in Kiev Reportedly Attacked Ahead of State Duma Elections
KIEV (Sputnik) — The Ukrainian police will also form a reserve force which can be deployed to secure public order if necessary, he added.

"Regarding tomorrow, due to the fact that Russian diplomatic missions will carry out election procedures, they, of course, will become an object of special attention for law enforcement. We will not secure the election process itself, we will ensure public safety on territories surrounding the diplomatic missions in order to prevent provocations, disorder or terrorist acts," National Police communications department head Yaroslav Trakalo told the 112 Ukraine channel.

Earlier in the day, the Russian Embassy in Kiev said about 20 people had attacked its building with smoke pellets and fireworks overnight into Saturday.

On September 18, Russian nationals will elect the Russian parliament's lower chamber of 450 seats. Half of the lawmakers will be elected from the party lists, while another 225 seats are contested in a single-member constituency race.