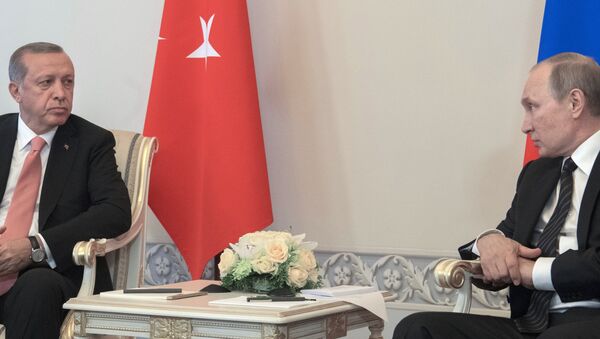 Turkey is looking for the restoration of economic ties with Russia, while Moscow is examining the "trustworthiness" of Turkish President Recep Tayyip Erdogan in his move to restore ties and bring them to a pre-crisis level, former US Ambassador to Turkey W. Robert Pearson told Sputnik Wednesday.

MOSCOW (Sputnik) – On Tuesday, Putin met with Erdogan in St. Petersburg for the first talks to reset bilateral relations after the November 2015 downing of a Russian aircraft by Turkey.

"Each of the two countries has something to gain from this meeting. Of course, Turkey wants to restore the economic ties, as it lost something like $30 billion in revenue because of the lack of economic relations with Russia. Also Turkey wants to show that it has an independent foreign policy and therefore it is happy to restore ties with Moscow," Pearson said.

The Turkish construction industry has been implementing a number of important projects in Russia, and Erdogan hopes that they will be restored as well, he added.

Ankara needs the restoration of relations with Moscow to get the ability to influence the situation in Syria and the crisis settlement, he stressed.

"There are two important aspects. One is that Turkey would like to have Moscow have less of its relationship with the Kurds. Also, Turkey wants to include leverage on what will happen to [Syrian] President [Bashar] Assad," Pearson said.

Russia wants to know what Turkey is planning to do with "its relationships in the past with the ISIS [Daesh]," he explained.

Relations between Moscow and Ankara hit rock bottom last November after a Turkish jet shot down a Russian plane on the Syrian border. Their ties started warming up again after the Turkish president offered his condolences to the family of the slain Russian pilot in June. During Tuesday's press conference, Putin said that Russia and Turkey were determined to find a mutually-acceptable solution to the conflict in the Arab republic.

Putin: Ankara Makes Positive Decision on Resuming Akkuyu, Turkish Stream
Syria has been mired in civil war since 2011, with government forces loyal to President Assad fighting numerous opposition factions and extremist groups, such as Daesh, outlawed in many countries, including Russia and the United States.

UN-mediated peace process in Syria came to a halt after the last proximity talks between the government and opposition in April. The Syrian Kurdish Democratic Union Party claims that its participation in the intra-Syrian talks was blocked by Ankara because of its assumed links to the pro-independence Kurdistan Workers' Party (PKK) militant movement, which is active in southeastern Turkey. Russia has been calling on the United Nations to invite Syrian Kurds to the proximity talks on settlement of the five-year civil war in Syria.