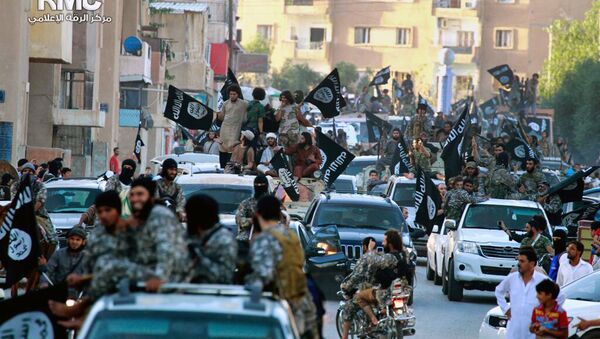 US-led coalition against the Daesh terrorist group aims to decrease the impact of its military campaign on the civilian population, the coalition’s foreign and defense ministers said in a joint statement on Thursday following their meeting in Washington, DC.

WASHINGTON (Sputnik) — The first joint meeting of the defense and foreign ministers of countries comprising the US-led coalition against the Daesh took place in the US capital on Thursday.

The Daesh is outlawed in the United States, Russia and numerous other nations.

"We also seek to reduce the impact of military operations on civilians, while preparing for humanitarian challenges and laying the ground work for rapid stabilization of liberated communities," the statement said.

The coalition of more than 60 nations has been conducting airstrikes against the Daesh terrorists in Iraq and Syria since the summer of 2014. In Syria, however, the coalition is acting without permission of the legitimate government of Syrian President Bashar Assad or the UN Security Council.

“As military operations expand and intensify, we call for redoubling efforts to protect civilians in conflict zones and those who flee conflict zones, securing safe routes, and preventing any abuses during and after hostilities, in full compliance with applicable international humanitarian law and human rights principles.”

The coalition members also supported Baghdad’s proposal to create a body to probe the violations against the civilian population, the coalition’s foreign and defense ministers said in a statement on Thursday following their meeting in Washington, DC.

"We support Prime Minister Abadi’s decision to establish a committee to investigate reported crimes against civilians fleeing liberated areas and the government’s determination to bring those responsible to justice."