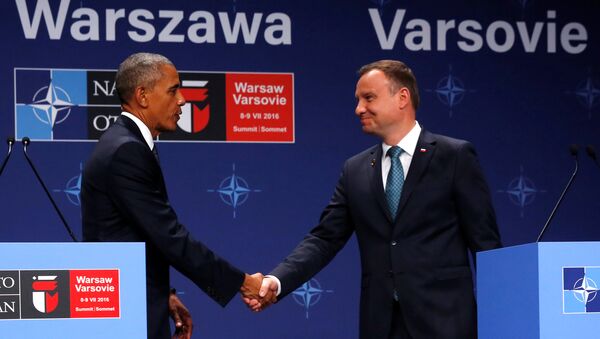 The NATO summit in Warsaw was "a contrived exercise" with the aim of isolating Russia, but it approved no decisions of real military value, with European members leaving the United States to do all the real work of the alliance, US analysts told Sputnik on Friday.

WASHINGTON (Sputnik) – The summit on Friday approved an unprecedented Western deployment of troops and weapon systems in Eastern European unparalleled since the end of World War II including the sending of 1,000 US troops to Poland.

"The whole point of this contrived exercise is officially to have NATO members designate Russia as a direct security threat," University of Pittsburgh professor of International Affairs Michael Brenner said.

The summit pushed the European member-states of NATO more firmly under the control of the US government led by President Barack Obama in his determination to confront Russia, Brenner pointed out.

The decisions taken in Warsaw "oblige those governments to do things that Obama wants them to do: confront Russia across the board; isolate it — economically and politically; and thereby strengthen US control over European foreign policies from the Baltics to Syria."

The buildup of US and other NATO forces in nations surrounding Russia approved at the summit were more important politically than militarily, but were meant to increase the isolation of the Russian government, Brenner warned.

"All those troop movements, deployment and exercises are symbolic acts in support of the [NATO alliance] strategy. They have no military meaning in and of themselves."

The Germans and other European governments feared to contradict Washington, Brenner added.

"So long as the Germans, and others, don't have the guts, to stand up to Washington and make autonomous judgments, the American project will succeed."

Eurasian Business Coalition Vice President Ralph Winnie told Sputnik the hawkish decisions reached in Warsaw reflected a fear that the alliance was much weaker than it appeared on the surface.

"Is a NATO a credible institution or is it just a facade without any muscle?" he asked. "Nobody has tested the will of NATO in many years."

The NATO leaders in Warsaw were trying to send a message to Moscow that they were a united front of countries that would stand back to back against any security threat. But they in reality feared that their grouping could rapidly fall apart the way the Warsaw pact did in 1989 — 1990, Winnie explained.

"When the Berlin Wall collapsed, the Soviet Union and the Warsaw Pact did not respond and within months the entire Warsaw Pact had disintegrated. It fell apart. NATO policymakers fear the opposite dynamic now."

The concern of the NATO leaders was that if they did not rally behind any member state faced with a crisis their alliance could quickly disintegrate too, Winnie noted.