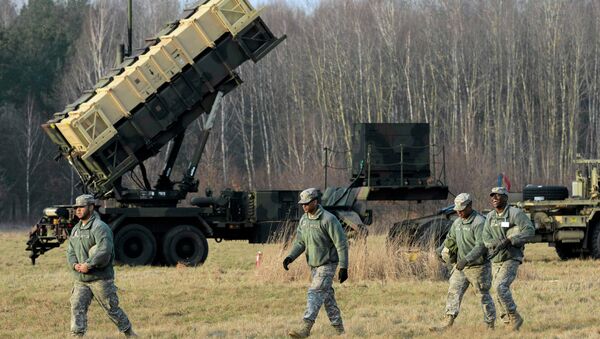 © REUTERS / Franciszek Mazur/Agencja Gazeta
Subscribe
NATO will adapt its Ballistic Missile Defence (BMD) if the threat of ballistic missile proliferation reduces, the Alliance said in a communique issued on Saturday at the conclusion of its two-day summit in Warsaw.

MOSCOW (Sputnik) — NATO is ready to discuss its ballistic missile defence with Russia if Moscow is ready for such talks, according to the document.

"We will develop further our engagement with third states, on a case-by-case basis, to enhance transparency and confidence and to increase ballistic missile defence effectiveness… Should Russia be ready to discuss BMD with NATO, and subject to Alliance agreement, NATO remains open to discussion," the communique said.

"Should international efforts reduce the threats posed by ballistic missile proliferation, NATO missile defence can and will adapt accordingly," the communique said.

NATO seeks to have a constructive relationship with Russia, however, it also depends on Russia actions, according to the declaration.

"NATO poses no threat to any country. In that spirit, we remain ready for a meaningful dialogue with Russia, to communicate clearly our positions and, as a first priority, to minimize risk from military incidents, including through reciprocal measures of transparency. We continue to aspire to a constructive relationship with Russia, when Russia’s actions make that possible."

"For over two decades, NATO has striven to build a partnership with Russia, including through the mechanism of the NATO-Russia Council (NRC). Russia’s recent activities and policies have reduced stability and security, increased unpredictability, and changed the security environment… Decisions we have taken, including here at our Summit, are fully consistent with our international commitments, and therefore cannot be regarded by anyone as contradicting the NATO-Russia Founding Act," the communique stated.

NATO calls on Russia to use all channels of communication with the alliance, including military ones, to address the critical issues and challenges.

"We remain committed to NATO’s Open Door policy, which has strengthened the Alliance and contributed to Euro-Atlantic security," NATO said in a declaration.

No Country Ready to Join NATO After Montenegro, US Open to New Members
NATO welcomes efforts of the Normandy Four group on implementation of Minsk agreements and full reintegration of Donetsk and Lugansk regions, the final communique said.

"We welcome the efforts of the Normandy format and the Trilateral Contact Group to advance the implementation of the Minsk Agreements to open the way to the full reintegration of the Donetsk and Luhansk regions, including passing a local election law for eastern Ukraine; carrying out local elections, when the security situation allows, in accordance with Ukrainian law and relevant OSCE standards and with a strong presence of international observers."

NATO summit is taking place in the Polish capital on July 8-9.