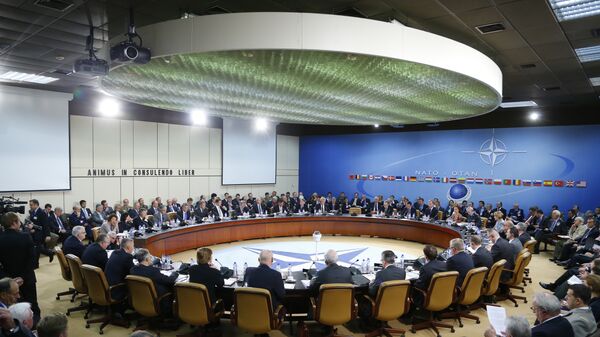 © AP Photo / Yves Herman
Subscribe
International
India
Africa
Russia should be treated as an equitable dialogue partner in the framework of NATO-Russia meetings or they will serve no purpose, a member of Russian delegation to the Parliamentary Assembly of the Organization for Security and Co-operation in Europe (OSCE PA) told Sputnik on Saturday.

TBILISI (Sputnik) — Earlier in the day, Russian Defense Ministry announced that the next NATO-Russia Council at permanent representatives level is scheduled for July 13, 2016 after NATO's summit in the Polish capital of Warsaw, scheduled for July 8-9.

"These meetings, certainly, is a necessary part of the dialogue between us. However, taking into the consideration a common negative perception of Russia and attempts 'to give us lectures', to tell us where and how say things and react, these meetings may become meaningless. Russia should be treated as an equitable dialogue partner," Nikolay Kovalev said on the sidelines of the ongoing OSCE PA annual meeting in Tbilisi.

Since 2014, NATO has been building up its military presence in Eastern Europe, using Moscow's alleged interference in Ukraine as a pretext for the move. Moscow has repeatedly denied the claims and warned NATO that the military buildup near Russia’s borders is provocative and threatens the existing strategic balance of power.