US Presidential Hopeful Trump Arrives in Scotland Amid Brexit Referendum 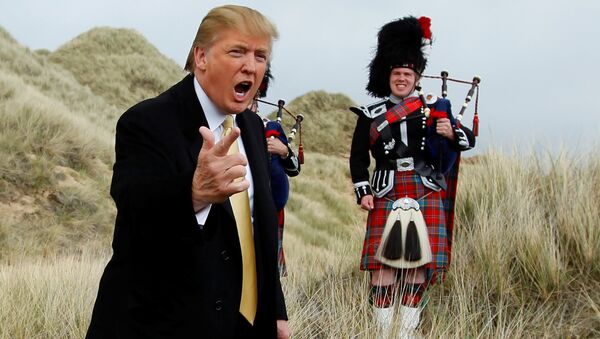 © REUTERS / David Moir/File Photo
Subscribe
US Republican Party presidential hopeful Donald Trump, who supports exit of the United Kingdom from the European Union, is expected to arrive in Scotland on Thursday, amid the ongoing UK referendum on membership in the 28-nation bloc, UK media reported.

London Ex-Mayor Boris Johnson Says Brexit May Be Turning Point in History
MOSCOW (Sputnik) — Trump, who has recently said, that he "would be inclined to leave" if he was the citizen of the United Kingdom, is expected to come to the European country, The Telegraph reported.

According to the newspaper, the US politician and businessman is expected to arrive in Scotland to participate in the opening ceremony of a luxurious resort on Friday.

British nationals are voting in the referendum to determine whether the United Kingdom should leave the European Union or not. Polling stations across the United Kingdom stay open from 7 a.m. (06:00 GMT) through 10 p.m. (21:00 GMT) local time. There is no threshold for turnout, and there will be no exit polls.

In 2015, UK nationals prepared a petition, which had gathered 586,935 signatures, to prohibit Trump from entering the country for his numerous controversial statements about Muslims during the presidential campaign.