Poland, France Support Dialogue With Russia From Position of Power 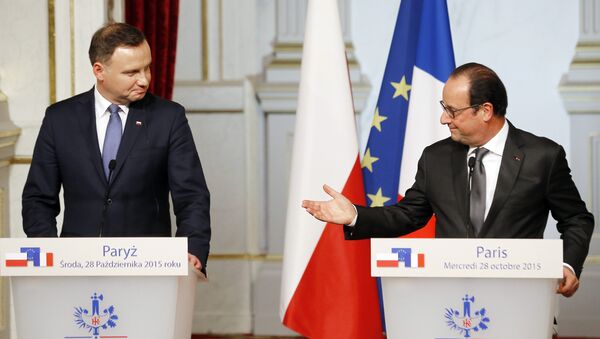 The Polish president and his French counterpart agreed on the necessity of the dialogue with Russia from the position of power.

US Delegation Visiting Crimea to Promote Citizen-to-Citizen Dialogue
MOSCOW (Sputnik) — Polish President Andrzej Duda and his French counterpart Francois Hollande discussed anti-Russia sanctions over the phone and agreed on the necessity of the dialogue from the position of power, Foreign Policy Adviser to the Polish President Krzysztof Szczerski said Tuesday.

"The position of Germany… France, Poland… is common and comes down to the fact that sanctions were imposed in connection with the violation of international law, the Minsk process is a formula for overcoming violations of the international law, and that without the implementation [of the Minsk agreement] there could be no talks about their [sanctions] lifting. We are talking about the dialogue which is handled from the position of unity and power," Szczerski said, as quoted by Poland's W Polityce online news outlet.

Relations between the European Union and Russia soured after Brussels imposed several rounds of economic sanctions against Moscow after Crimea reunified with Russia and in light of Russia's alleged role in the conflict in southeastern Ukraine. Russia has refuted any allegations of involvement in the hostilities and advocated settling the conflict between the Kiev forces and southeastern Ukrainian pro-independence militia peacefully.