A Sorry State of Affairs: Restoring Russia-Turkey Ties 'Not That Easy' 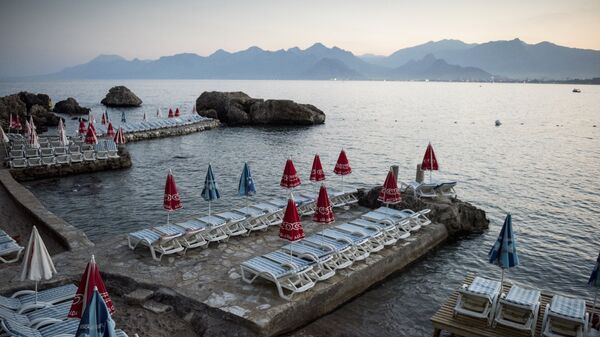 A restoration of Russian-Turkish ties will only take place if there are "radical policy changes in Ankara and Moscow," the Turkish newspaper Hurriyet Daily News reported.

Russo-Turkish Crisis: 'Antalya Has Lost This Tourist Season'
A deadlock in Russian-Turkish relations will only be resolved if Ankara and Moscow drastically change their policy toward each other, according to Hurriyet Daily News columnist Murat Yetkin.

In his article, titled "Normalization with Russia: not that easy," he recalled that the crisis in bilateral relations came after Ankara's downing of the Russian Su-24 warplane in November 2015 after it allegedly violated the Syrian-Turkish border.

In this vein, he specifically pointed to the fact that it was the Turkish resort city of Antalya has been rocked by the standoff's economic repercussions, given that "in 2016 Antalya lost more than 90 percent of its tourists from Russia."

"Not only has the tourism sector been hit; as one of Turkey’s major fresh fruit and vegetable exporters, Antalya farmers have also been suffering a lot from the embargo of Russia, their major client," Yetkin said.

He also pointed out that Ankara and Moscow both currently desire to return bilateral relations to normal. Russian President Vladimir Putin has nonetheless made it plain that "there was one condition for this," namely, Turkish authorities must apologize for the incident and compensate the pilots.

"There is now a stalemate situation where both countries are losing. These are perhaps mutual gestures to break the ice between them, but there is still no sign of a softening political stance by either Turkey or Russia. An apology by Erdogan would not be easy," Yetkin said.

He added that after Ankara's downing of the Russian warplane, the Turkish Air Force has been unable to conduct military operations against Daesh in Syrian air space due to possible retaliation from Russia.

So the question is whether Russia would now like to see "Turkey back in the Syrian theater, [fighting] against its ally Assad," Yetkin said, referring to US Secretary of State John Kerry, who had earlier warned Russia that Washington's patience over the tolerance shown the Syrian President was wearing thin.

"Amid this uncertainty, normalization in Turkish-Russian relations should not be expected any time soon, unless there are radical policy changes in Ankara, Moscow, or both," Yetkin concluded.

Perfect Match: Why Russia and Turkey 'Compliment' Each Other So Well
Russian-Turkish relations deteriorated after a Turkish F-16 fighter jet shot down a Russian Su-24 bomber on November 24, 2015 while it was on an anti-terror mission in Syria under the pretext that it had allegedly violated Turkish airspace.

There were two pilots on board the Su-24; one of them was killed by terrorists while parachuting to Earth. The other pilot managed to survive.
Both the Russian General Staff and the Syrian Air Defense Command confirmed that the Russian plane had never entered Turkish airspace.

Moscow imposed a number of restrictive measures on Turkey in response to what Russian President Vladimir Putin decried as a "stab in the back."
The Turkish president called the Su-24 incident a pilot's mistake, and said it wasn't worth ruining relations between the two countries.