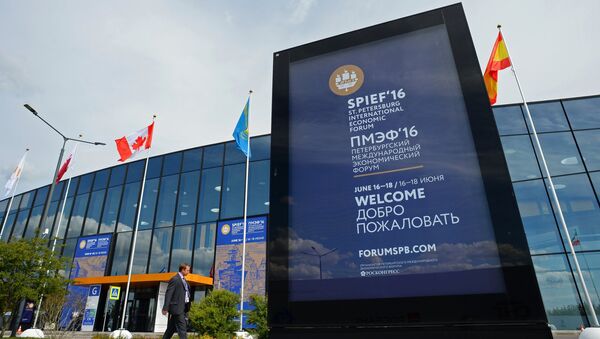 © Sputnik / Ramil Sitdikov
/
Go to the mediabank
Subscribe
International
India
Africa
Several high-ranking officials, most notably European Commission President Jean-Claude Juncker and Italian Prime Minister Matteo Renzi, have participated in SPIEF for the first time since the introduction anti-Russia sanctions in 2014 and before their anticipated revision, which is expected to prompt a reset in EU-Russia relations.

World
'Back to Business': St Petersburg Forum Opens Doors to East and West
MOSCOW (Sputnik) — Since 2014, Brussels, Washington and their allies have introduced several rounds of sanctions against Moscow over the Kremlin's alleged interference in the Ukrainian conflict – a claim Russia has firmly denied. On June 28-29, the EU leaders are set to decide on the further prolongation of the sanctions at a summit in Brussels.

The 2016 St. Petersburg International Economic Forum is taking place on June 16-18. According to the organizing committee, the number of contracts at SPIEF is expected to reach at least 293 billion rubles ($4.4 billion).

On the sidelines of the forum, Russian President Vladimir Putin and Jean-Claude Juncker have discussed relations in the field of energy, and bilateral ties between Moscow and Brussels. The issue of sanctions per se has not been discussed.

Not All EU Member States Agree on Sanctions' Extension

Lifting Anti-Russian Sanctions: Which Side Will France Choose?
Ahead of the upcoming renewal of the sanctions, several EU member states have voiced their disapproval of the automatic prolongation of the restrictive measures. One such state was Italy, where businesses have suffered some $4 billion in losses annually due to the anti-Russia sanctions, according to the Association of Italian Entrepreneurs.

"Indeed, Italy, Hungary, Cyprus, Greece and a few other European Union member states spoke against the extension of the sanctions. But this was largely for its domestic audience," Hrant Kostanyan, a researcher at the Centre for European Policy Studies (CEPS), told Sputnik.

A ban on certain agricultural products and foodstuffs, introduced by Moscow as a retaliatory measure against countries that adopted anti-Russia sanctions over the Ukrainian conflict, has had little effect on these losses.

However, cuts in exports of equipment for oil and gas production, processing industries and metalwork were enough to do significant damage to several European economies.

"The EU sanctions led to some Russian counter sanctions, but these were much less important for the EU than vice versa," CEPS Associate Senior Research Fellow Centre Michael Emerson argued.

Despite calls from some EU member states and the French Senate passing a resolution calling on its government to ease the sanctions against Russia, experts agree that the EU leaders will prolong the restrictive measures.

"I have no official information, but I expect the sanctions to be renewed," Emerson told Sputnik.

Kremlin: Failure to Implement Minsk Agreements on Ukraine 'Unacceptable'
The certainty regarding the outcome of the upcoming summit comes from G7 leaders and EU high-ranking officials, including Juncker, who have reiterated that the full implementation of the Minsk deal on Ukrainian reconciliation is the only way that the economic sanctions against Moscow would be lifted.

"The leaders of Europe have consistently said that the only path to lifting the sanctions on Russia is the full implementation of Minsk 2," Richard Nephew, a program director at Columbia University, affirmed to Sputnik.

Nevertheless, the approaching sanctions renewal date may be the last time they are prolonged before they are eased or completely removed, as they have proved to have had a negligible effect on Russia’s economy, which shrank by four percent in 2015 mainly due to slumping oil prices.

"One of CEPS studies shows that sanctions had little impact on trade in goods between the EU and Russia. The slowdown in trade in goods can be attributed mainly to low oil prices and not sanctions," Kostanyan said.

Moreover, the World Bank recently upgraded its forecast for GDP growth in Russia in 2016 by 0.7 percent as well as revising upwards its forecast for 2017 by 0.3 percent, expecting the Russian economy to reach 1.4 percent growth in 2017.

Russia Extends Food Embargo Until the End of 2017

On Thursday, Russian Economy Minister Alexei Ulyukaev said that the ministry was preparing documents on extending food import restrictions until the end of 2017 with the list of countries and goods remaining mostly unchanged.

However, the proposal ordered by Russian Prime Minister Dmitry Medvedev back in May is unlikely to have any impact on EU leaders’ possibly coming to a consensus on gradually lifting the anti-Russia sanctions by the time of their next review after another six-month period has elapsed, according to experts.

"Russia’s retaliatory measures will not affect the EU sanctions. Yet, Russia's implementation of Minsk 2 will be decisive," Kostanyan stressed.

During his speech at the SPIEF, Juncker said that he liked being in St.Petersburg despite some disapproval among western politicians, stressing the need to revive dialogue with Russia.