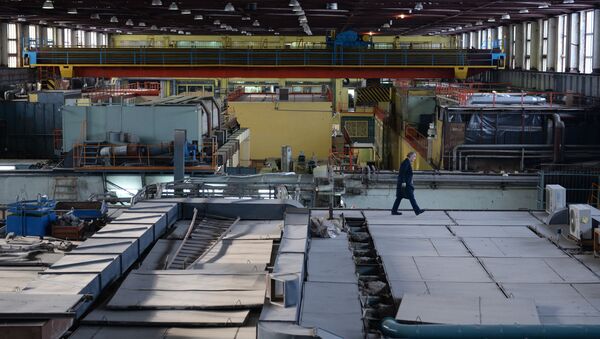 © Sputnik / Alexandr Kryazhev
/
Go to the photo bank
Subscribe
National Research Nuclear University MEPhI is actively involved in international educational projects related to nuclear technology by helping countries that are newcomers in the nuclear industry to train staff, while also constantly improving its own educational programs.

Georgy Tikhomirov, Dean of the Faculty of Physics and Technology at the National Research Nuclear University MEPhI, shared with RIA Novosti how the university intends to develop its curriculum.

Mr Tikhomirov, Moscow recently hosted the 2016 Atomexpo International Forum, where for the first time MEPhI had a separate program that turned out to be very popular with the forum participants. What did the university present at the forum?

Full Steam Ahead: Rosatom Ready to Start on Iran's New Nuclear Reactors
On June 1, we presented at the forum those MEPhI's educational programs that are aimed at training foreign specialists to work on Rosatom State Corporation projects implemented abroad. We also showed a multimedia presentation of our educational technologies.

Currently we are mostly focused on training staff for Rosatom projects focused on building nuclear power plants abroad. However, moving forward we would also like to offer training to specialists involved in various nuclear research projects, for example using nuclear research reactors. This type of activity is now picking up pace across the world. Over 900 students from 30 countries are currently enrolled in MEPhI.  Of course, we will not stop there.

What are the programs that MEPhI can offer to its partners?

We are ready to offer a wide range of educational programs. There is a specialist degree program for people from countries where Rosatom intends to build NPPs with all the necessary documentation in Russian. This goes for the degree program Nuclear Power Plants: Design, Operation and Engineering. It is very important for future employees of NPPs to evolve in a Russian-speaking environment so that they can easily work with the relevant documents. At the same time, I cannot rule out that some of our educational projects will be in English, though, as a number of countries where NPPs will be built, for example in Jordan and Finland, documentation will be in English. It is for that reason that we've introduced English-language master's degree programs. The project will be launched on September 1, 2016, but some of its components are already being implemented.

How do you enroll students for your master's degree programs?

Rosatom offers a set number of scholarships. Until recently, they were only offered for Russian-language programs. Starting this year, Rosatom also introduced scholarships for the English-language master's program for three to five people from Hungary, the Czech Republic, Slovakia and Bulgaria.

At the Atomexpo 2016 forum, the IAEA signed a cooperation agreement with STAR-NET, the Regional Education and Training Network in Nuclear Technology. This project was launched in late 2015. How is this network project advancing?

Let me remind you that STAR-NET is a new regional education network in nuclear technology for East European and Central Asian countries. STAR-NET's establishment was facilitated by the IAEA, and NRNU MEPhI was one of those who spearheaded this project together with the Belarusian State University of Informatics and Radioelectronics and the Alexeyev Nizhny Novgorod State Technical University. Just like any other education network, this project's aim is  to enable participants to get to know one another better, compare their programs and move on to implement joint projects.

For instance, in April, Belarus hosted a meeting on the project, and working groups were created for drafting proposals on network development. In July, MEPhI will host a summer school for computer modeling in engineering. This event will be supported by STAR-NET. Students from Belarus are also expected to attend this summer school.

How does MEPhI interact with regional nuclear education networks that were created previously?

We are now actively working with ENEN, the European Nuclear Education Network, which consists of some 50 organizations, and not only universities but also European nuclear research centers. Rosatom's Central Institute for Continuing Education and Training and MEPhI are ENEN's associated members. There is an ENEN-RU II project with this network to promote cooperation with Russia. Three ENEN-backed post-graduate students from Italy, Romania and Slovakia are currently on an internship program in MEPhI.

Any networking project is important since it provides opportunities to expand contacts, and launch new programs and projects. Together with our European partners we are discussing the possibility of creating English-language educational programs at MEPhI in cooperation with ENEN universities. This effort could evolve into a double degree program in the future.

One of highlights of Atomexpo 2016 forum was the signing of agreements between MEPhI and schools from the cities where Rosatom's TVEL Fuel Company enterprises operate. What do these documents hope to achieve?

It is very much in the interests of Rosatom divisions, including TVEL, to begin training their future qualified staff before they leave school, while NRNU MEPhI has a long track record of operating as a network university with branches in cities where Rosatom is present, including its fuel company.

We are ready to offer training courses for these school students leveraging our network technologies, at a level no less than that offered at "Listey" schools. In addition, school teachers will get an opportunity to attend advanced training courses. This is our mission. We will do all we can for this project to succeed.