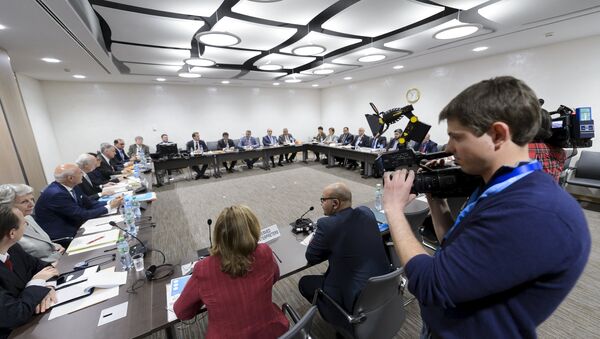 © AFP 2023 / Fabrice Coffrini/Pool
Subscribe
International
India
Africa
Mais Krydee, one of the leaders of a domestic Hmeymim-based opposition group said that Kurds must be part of a new negotiating team of the Syrian opposition.

Ex-Chief Negotiator Alloush to Advise HNC on Security After Resignation
MOSCOW (Sputnik) — A new negotiating team of the Syrian opposition that may be created by the next round of the talks should be more moderate and include Kurds, Mais Krydee, one of the leaders of a domestic Hmeymim-based opposition group told Sputnik on Wednesday.

"When you need to build peace, you need to have a more realistic vision, being closer to the ‘middle’ and closer to people in Syria. We need to make this step in the right direction and make a new negotiation group, having a more realistic vision. It is important to remember that Kurds must be part of this negotiating team too. They must also be at the negotiation table," Krydee said.

World
NATO Should Stay Clear of Syria to Keep Peace Talks Alive - Harald Kujat
A Syrian government delegation, as well as three opposition groups — the Riyadh-formed HNC, the Moscow-Cairo and the Hmeymim groups have been taking part in the UN-mediated Geneva talks.

The Syrian Kurdish Democratic Union Party claims that its participation in the intra-Syrian talks was blocked by Ankara because of its assumed links to the pro-independence Kurdistan Workers' Party (PKK) militant movement, which is active in southeastern Turkey.

The latest round of intra-Syrian talks took place in Geneva on April 13-27. The HNC walked out of the negotiations, citing the continuous fighting in Syria and the lack of progress on humanitarian issues.