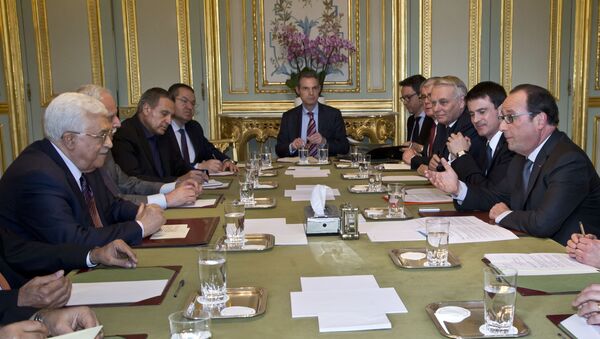 The international ministerial meeting on Israeli-Palestinian peace scheduled to be held on June 3 in the French capital will be preceded by an official expert meeting a day before where a draft of the conference's final declaration is due to be prepared, Palestinian Ambassador to France Salman Harfi told Sputnik on Tuesday.

Palestine's Envoy Accuses Israeli Gov't of Attempts to Derail Peace Talks
VIENNA (Sputnik) — In April, French Foreign Minister Jean-Marc Ayrault announced that the ministers of 20 countries would take part in a meeting in Paris to relaunch the Israeli-Palestinian peace process. Neither Israeli nor Palestinian officials will be attending the event.

"An official expert meeting is set for June 2 in Paris. The experts will discuss procedures, look into the final declaration that will be discussed at the ministerial level on June 3," Harfi said.