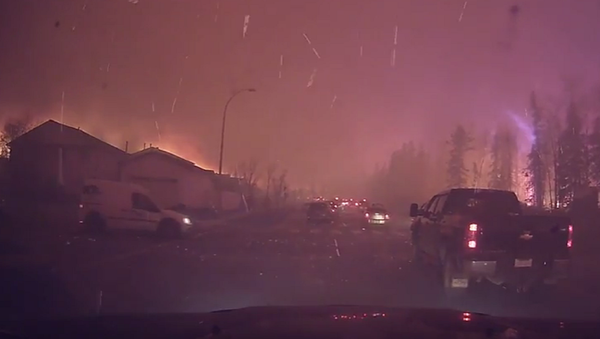 Large sections of the Canadian province of Alberta have been ablaze as a massive wildfire continues to burn abated, causing a state of emergency to be declared.

The fire, which authorities are calling “catastrophic,” began Sunday in the oil sands region and had grown five times its original size by Thursday. The so-called Fort McMurray Fire has already prompted over 88,000 evacuations and destroyed more than 1,600 structures in the town of Fort McMurray.

The fire is currently burning between 800 C and 1,000 C, making it so hot that officials believe only rain will be able to stop it.

​"Temperatures are expected to remain high, with a glimmer of hope on the horizon as a cold front approaches," CBC News reported on Thursday. "It could, however, bring lightning with it, possibly starting more fires. It is a nearly impossible situation."

The intense heat has limited air operations and made it difficult for the over 150 firefighters currently on the ground to contain it.

"There was a mild winter and not a lot of meltwater from the mountain snowpack. Now, a stale air mass has been sitting over Alberta, and it led to very low humidity. Then there was an early, hot spring, and everything got very dry. Then on top of that, it got windy,” Mike Wotton, a research scientist with the Canadian Forest Service and professor at the University of Toronto told the CBC.

This type of wildfire, called a “crown fire,” occurs when the tops of conifers, often referred to by the more generic phrase ‘pine trees,’ which burn much faster than deciduous trees, catch fire and spread across a forest canopy.

Scientists are now warning that massive fires such as the McMurray Fire will increase in frequency as the Earth’s atmosphere continues to heat up as a result of global warming due to climate change.

"Climate change models and research all point to the idea that fire season is going to be longer in the coming years, and the fires will be more severe," David Andison, adjunct professor with the faculty of forestry at the University of British Columbia, told CBC. "It will really just be the new normal."

On Thursday, Prime Minister Justin Trudeau announced that the government will be matching all donations to the Canadian Red Cross to assist those who are displaced or affected by the fire.

"The outpouring of goodwill and compassion from Canadians right across the country has not only been inspirational, it has been entirely characteristic of who we are and the fundamental human values we share as Canadians," Trudeau said.