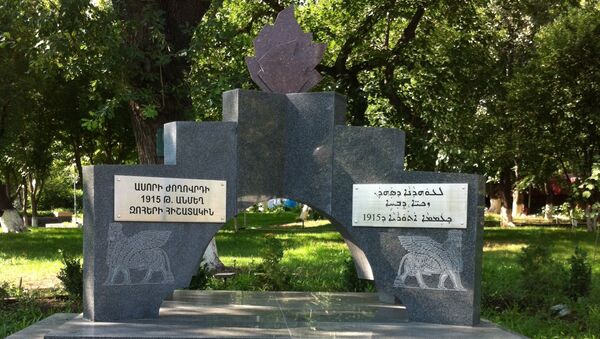 A programme director of Swedish TV4 television network said in a statement that the Turkish embassy called for the broadcaster to withdraw a film about the genocide of Assyrians, Armenians and other ethnic minorities in the Ottoman Empire during the World War I.

Armenia Will Never Give Up Fight to Get Turkey to Recognize Genocide
MOSCOW (Sputnik) – The broadcaster showed a documentary entitled "Seyfo 1915 — The Assyrian Genocide," on Sunday. Seyfo is a term that is used to describe mass killings of the Assyrian population in the Ottoman Empire that took place during the World War I alongside with the genocide of other ethnic groups, such as Armenians.

"Turkish embassy [to Sweden] has tried to exert pressure on TV4 to stop a documentary. They urged us to 'reconsider our decision' to broadcast the 'Seyfo 1915 — The Assyrian Genocide' in the evening," Viveka Hansson said in a statement published on Sunday.

She added that the TV channel would never accept such demands and would protest against attempts to bring pressure on freedom of expression.

During and after World War I, the Ottoman government ordered a series of mass killings and starvation against the country's minorities, such as Assyrians, Armenians and Greeks. Turkey refuses to recognize the massacre as genocide, claiming that Turkish nationals were also victimized.

Turkey's attempts to impose restrictions on freedom of speech both within the country and abroad, have previously been criticized by the international community, including the United Nations, the United States, the European Union, Russia and the organization Reporters Without Borders (RSF). Turkey ranks 151th out of 180 countries in the RSF 2016 press freedom index.