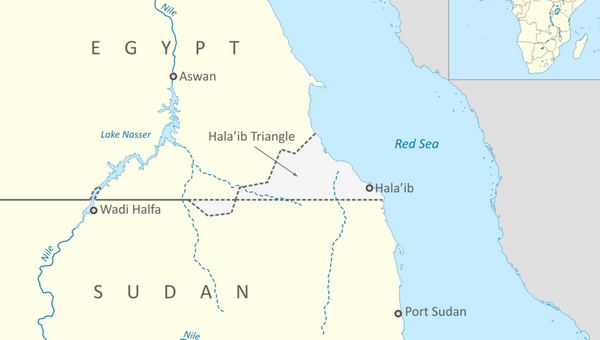 © Wikipedia / Pakko
Subscribe
The Hala'ib Triangle, the region disputed by both Cairo and Khartoum, is the part of the Egyptian state, the spokesman for Egyptian Foreign Ministry said Monday.

CAIRO (Sputnik) — On Wednesday, a senior official at the Sudanese Foreign Ministry told Sputnik that Khartoum had sent an official request to Cairo to take the Hala'ib Triangle territorial dispute to the International Court of Justice, but Egypt had responded with refusal.

"The Hala'ib Triangle is the territory of Egypt, and Egypt's sovereignty covers it. There will be no other comments on the statements of the Sudanese authorities," Ahmed Abu Zeid said.

Egypt has been de facto administrating the Hala'ib Triangle, an area of almost 8,000 square miles on the Red Sea's African coast, since the mid-1990s.

Sudan has raised the territorial issue anew as Egypt decided to hand two disputed islands in the Red Sea, Tiran and Sanafir, over to Saudi Arabia.