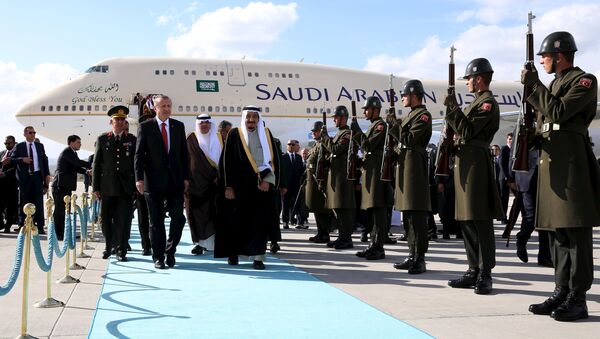 MOSCOW (Sputnik), Svetlana Alexandrova – On Thursday, Russian President Vladimir Putin said during the Direct Line Q&A session that the Turkish government is fighting extremists in the country less than it is cooperating with such groups.

"Mr. Erdogan is playing a very dangerous game trying to recreate the Ottoman Empire across parts of Europe and Syria for this purpose Mr. Erdogan is trying to secure a wide range of partners among Islamists and build connections with the Wahhabi regime of Saudi Arabia," Nicolas Dhuicq said.

The lawmaker noted that Saudi Arabia's King Salman visits Ankara these days as a personal guest of the Turkish President "who is an Islamist himself."

According to Dhuicq, Erdogan’s plan includes attempts "to inhabit the border and some Syrian villages of the north of the country with Turkic-speaking people, trading oil with Iraqi Kurds and using its military might on [the Kurdistan Workers' Party] PKK’s rebels and the Syrian Kurds."

Tensions between Ankara and Turkey's Kurdish population escalated in July 2015 as fighting between the Kurdistan Workers’ Party (PKK), a pro-independence organization considered to be a terrorist group by Ankara, and the Turkish army resumed.

Turkish President Recep Tayyip Erdogan alleges over 5,000 Kurdish insurgents have been killed in the campaign since mid-December, a figure that pro-Kurdish officials contend includes hundreds of civilians.

The Ottoman Empire preceded modern Turkey. It encompassed most of present-day Turkey, Syria, Iraq and Lebanon, among other territories, including in Europe.