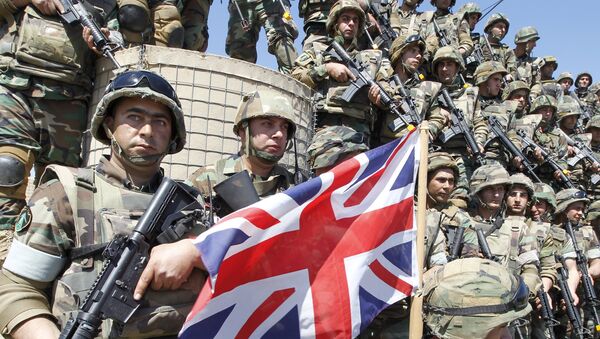 © REUTERS / Mohamed Azakir
Subscribe
The United Kingdom will allocate 19.8 million British pounds ($28.5 million) over 3 years for Lebanon to combat threats to its national security, including from the Daesh jihadist group, the Foreign Office said Thursday.

"Lebanon is a partner in the Global Coalition to defeat Daesh [Arabic acronym IS]. It is on the frontline of the crisis in Syria and faces a high threat from terrorism. Our support for the Lebanese army is enabling them to build their capabilities, strengthen the country’s borders and protect the Lebanese people," Hammond said in a press release delivered by the Foreign Office.

A pound equivalent of $6.5 million would be earmarked toward Lebanon’s military training facility in Hamat, which Hammond toured as part of his visit. A further $22 million is slated to go for Land Border Regiments mentoring to protect the country from Daesh, a group outlawed in a number of countries including Russia.

"The UK and Lebanon have a strong and long standing relationship. In meetings with the country’s leaders I reaffirmed the UK’s support for a secure, stable and prosperous Lebanon," Hammond added.

The Foreign Office stressed the United Kingdom’s support to promote stability in Lebanon by committing a total of $524 million toward these efforts.