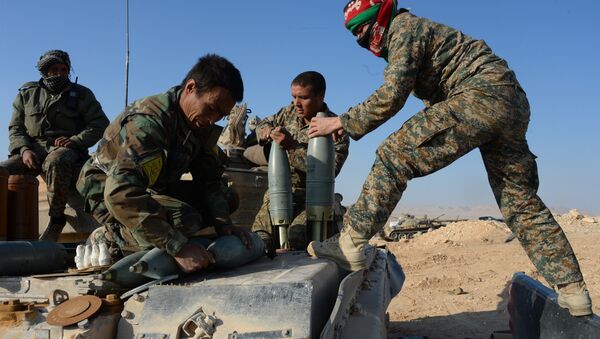 The commander of the Russian military contingent in Syria said that Russia has supplied the Syrian government forces with modern weaponry.

Russia Should Continue Anti-Terror Fight After Pullout From Syria - Senator
MOSCOW (Sputnik) – Russia has supplied the Syrian government forces with modern weaponry, including artillery systems and communications means, to increase their combat capability in the fight against terrorists, the commander of the Russian military contingent in Syria said.

"In order to boost the combat capability of Syrian army units and patriotic opposition groups, we have supplied them with modern weaponry and equipment, including artillery systems, communications and reconnaissance means, etc.," Col. Gen. Alexander Dvornikov said in an interview with Rossiiskaya Gazeta posted on its website.

Moreover, Russian military advisers provided active and efficient assistance to government forces, Kurdish militia and patriotic opposition ensuring their success in stopping the advance of terrorist groups in Syria, the commander of the Russian contingent in Syria said.

"Our advisers took an active part in the preparation of combat actions, which had a positive impact on the situation [in Syria]," Col. Gen. Alexander Dvornikov said in an interview with Rossiiskaya Gazeta.

"This joint work has allowed to destroy terrorist infrastructure and logistics channels, to regain the initiative and begin the offensive…on 15 fronts," Dvornikov stressed.