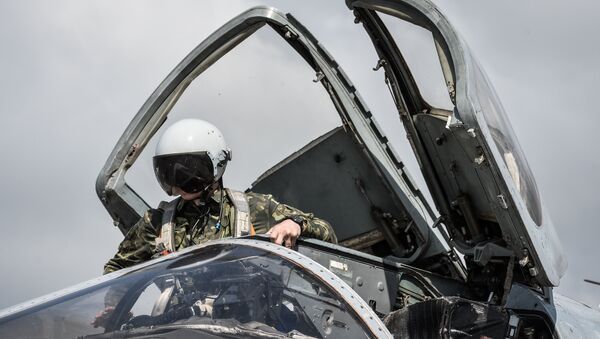 Russia pulled its air force out of Syria after it had achieved its strategic goal of preserving the Syrian state and establishing conditions for the success of the Syrian army in land operations, analysts told Sputnik.

WASHINGTON (Sputnik) — On Monday, Russian President Vladimir Putin ordered Defense Minister Sergei Shoigu to start withdrawing the Russian airgroup from Syria on Tuesday as it completed the assigned tasks. The withdrawal occurred on the same day as proximity talks between the government of Syrian President Bashar Assad and a number of Syrian opposition groups began in Geneva.

"It's a perfect demonstration of Clausewitz's dictum that war is correctly practiced only when directed to achieving a definable political end, which in Syria, Russia seems now to have achieved," University of Copenhagen Professor Matthew Dal Santo said.

Although the nearly seven-month Russian air support operation had not destroyed the Daesh, it had critically weakened its forces in Syria and given the Syrian army the breathing space it needed to recover and regroup for future ground attacks, Dal Santo explained.

"Critics will say that Daesh remains undefeated. But, short of committing Western or other foreign ground troops, it is clear Daesh can only be defeated by the professional Syrian army, whose continued presence in the field Moscow has ensured."

Russia’s ability to remain focused on its specific operational goal and not get distracted into other complex activities were crucial to its success in Syria, Dal Santo argued.

"By showing it knows where its interests lie and can define the limits of not only what it can but needs to achieve, the Russian leadership will probably emerge from the Syrian intervention with its reputation enhanced."

Dal Santo maintained that Russia had also avoided the trap of committing itself too closely publicly to Syrian President Bashar Assad.

The pull out "confirms what the Kremlin has been saying all along — that the purpose of its intervention has been to save Syria's governing institutions, but that it is not wedded to Assad," he observed.

"With the Syrian government steadied, Russia's withdrawal of its air group will put pressure on Assad to bend in the Geneva negotiations."

US author and Middle East affairs expert Dan Lazare agreed that Russia’s decision to withdraw its air force from Syria was rooted in political as well as military considerations.

He too cautioned that the Daesh had not yet been destroyed as a political entity and military force in Syria.

"It's hard for me to believe that the ISIS[Islamic State]-al Qaeda threat has really been eliminated," Lazare added.

Matthew Dal Santo is a historian and Danish Research Council post-doctoral fellow at the Saxo Institute, University of Copenhagen, where he is leading a project on history and identity in modern Russia.

Dal Santo previously worked for the Australian Department of Foreign Affairs and Trade, and is a former Fellow of Trinity College, Cambridge.