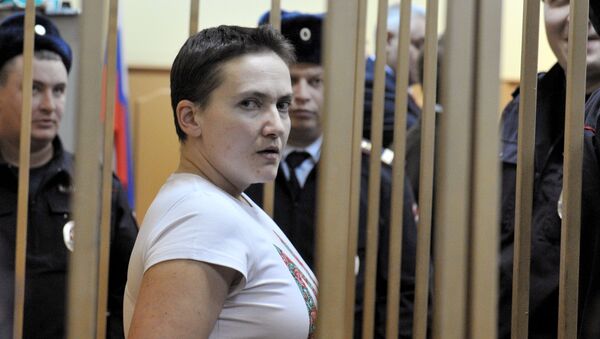 MOSCOW (Sputnik) – EU foreign policy chief Federica Mogherini has called for the immediate release of Ukrainian national Nadezhda Savchenko, who is currently on trial in Russia for the murder of two Russian journalists in eastern Ukraine.

"Her release would be in line with Russia’s international human rights commitments as well as with the ‘Package of measures for the implementation of the Minsk agreements’ and the commitment therein to release all hostages and detained persons related to the conflict in eastern Ukraine," Mogherini said in a Wednesday statement.

On Tuesday, several members of the European Parliament called on Mogherini to sanction Russian President Vladimir Putin and 28 other individuals, including senior Russian officials, over the Savchenko case.

Anti-Russia Sanctions to Yield No Solution to Savchenko Case – Lawmaker
Nadezhda Savchenko is suspected of helping to direct artillery fire near the eastern Ukrainian city of Lugansk on June 17, 2014, which led to the death of two Russia journalists, Igor Kornelyuk and Anton Voloshin.

Last week, Savchenko vowed to refuse both liquids and solid food protesting against the postponement of her final speech in Russian court.

According to Mogherini, Savchenko’s health condition is deteriorating rapidly.