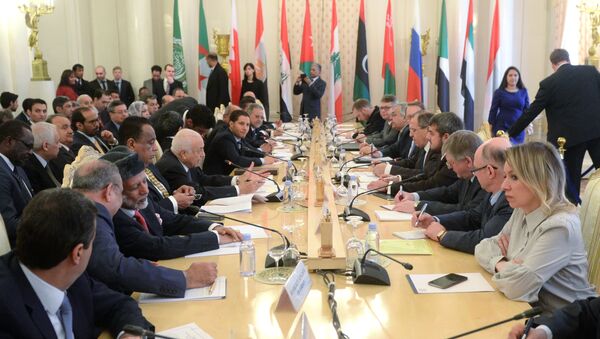 According to Yemen's top diplomat, Foreign Minister Abdel-Malek al-Mekhlafi, who will be attending the Russian-Arab forum in Moscow on February 26, will hold meetings with Russian Foreign Minister Sergei Lavrov.

"I came both to participate in the Russian-Arab forum as well as a personal meeting with Mr. Lavrov and his deputy, Bogdanov, in order to inform them of the situation in Yemen and emphasize the stability of [our] relations," al-Mekhlafi said in an interview.

Al-Mekhlafi added that during the meeting, the sides would discuss "paths Russia may propose to support the fulfillment of [UN Security Council] resolution 2216 and the peaceful settlement that the UN controls through its UN Secretary UN Special Envoy Mr. Ismail Ould Cheikh Ahmed."

The third session of the Russian-Arab forum of cooperation on the foreign ministerial level will be held on February 26 and the heads of foreign ministries of the United Arab Emirates, Jordan, Bahrain, Egypt plan to attend, as well as the Secretary General of the League of Arab Nations.

The forum will address issues in the Middle East and Africa, including the fight against extremism and terrorism. Officials from Russia and Arab nations will discuss crisis-solving strategies and their response to common threats. Also on the agenda is the Arab-Israeli issue and the creation of a zone free from weapons of mass destruction in the Middle East.