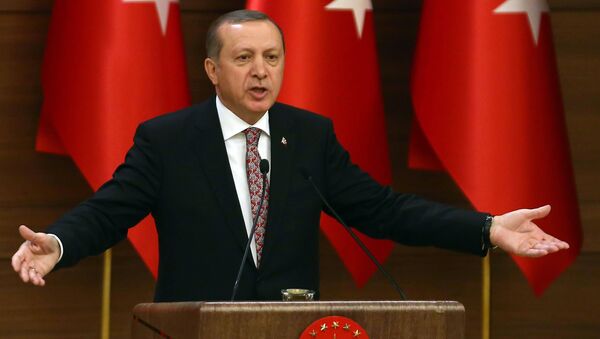 Andrew Korybko
All materials
Erdogan whacked a hornet’s nest when he broke the ceasefire with the Kurds, and now it looks like there’s never any going back to the way that things used to be.

Erdogan's War Against Kurds in Southeast Turkey is 'Part of Business Plan'
Southeast Turkey has been in flames since this summer after Erdogan took a risky pre-election gambit in attacking the Kurds. He sought to attract the MHP nationalist vote after his AK Party's surprise first-round electoral loss, and while this may have won him the Presidency, it could very well lose him the country, at least in terms of its present administrative arrangement.

Erdogan is so fearful of Kurdish separatism that he's ordered the military to brutally and blindly crack down on the community both at home and abroad. This explains the Ottoman-like violence that's befallen Diyarbakir, pro-Ankara Barzani's traitorous "invitation" for the Turks to invade Northern Iraq last December, and the latest cross-border shelling against the Syrian-based YPG. The Turkish strongman is now fighting against the Kurds in three separate theaters and there's no foreseeable end in sight.

According to Ankara, it won't ever tolerate the Kurds being granted autonomy, federative status, or independence anywhere, no matter where they reside, although it peculiarly has no qualms about the Iraqi Kurds running their own de-facto independent statelet. This double standard is likely due to the fact that Barzani is in Erdogan's pocket and Turkey therefore controls the Kurdish Regional Government as a proxy, although if RT contributor Andre Vltchek's latest expose is any indication, then the despairing situation there might lead to fertile ground for an anti-government uprising against the pro-Turkish leadership.

What's most important in this entire regional calculus, however, are the events that are taking place in Syria nowadays and the potential future role that the Kurds could play there. While Erdogan is aggressively doing whatever he thinks he can to thwart them from one day achieving autonomous or federalized status, the fact remains that if Syrians vote for such a clause in their forthcoming constitution, then there's nothing that he can do to stop them because the UN Security Council already said that they would respect whatever agreement the Syrians eventually reach amongst themselves.

The "Race For Raqqa", which the author had precisely forecast in October alongside his colleague, is now in full swing, and it remains to be seen whether it'll be the Syrian Arab Army (SAA) or the "Syrian Democratic Forces" (SDF) that eventually liberate the city from Daesh. The consequences are way more far-reaching and long-term than simply priding oneself in having accomplished this herculean task (which in and of itself will be monumental), but directly impact on Syria's internal administrative future.

The SDF is mostly comprised of the Kurdish YPG and a few Arab militias, and it represents the only instance thus far in the New Cold War where an actor is receiving military assistance from both Russia and the US. Moscow provides the SDF with air support while the US gives it weaponry and training, and it's unclear at this moment of time which of the two it's more loyal towards, if either at all.

Erdogan’s Cruel Calculus: Killing Kurds at Home and in Syria Means Votes
It's likely that the Kurds simply want to use both Great Powers to help them liberate Raqqa so that they can later ‘trade' it back to Damascus in exchange for a guarantee of federalization. If they succeed in acquiring this much sovereignty, then it could cause a chain reaction among other identity groups to do the same, which would thereby fulfill the Brookings Institution's plan for a weakened central state comprised of a kaleidoscope of ethno-regional political identities.

On the other hand, the SAA is fighting to maintain a unitary state without any politically formalized identity differences, and if it liberates Raqqa, then it would be in a prime military and normative position to reinforce the country's territorial integrity. At the same time, they probably wouldn't go as far as clashing with the Kurds in any post-Daesh environment, understanding that the established facts on the ground in northern and northeastern Syria are something that would necessitate a political solution to resolve.

No matter what happens — be it the majority-Kurdish SDF pushing for federalization or the SAA wanting to retain national unity — nothing of the sort can occur in post-conflict Syria without the voice of the people being heard. UNSC Resolution 2554 specifically mandates that a new constitution be drafted, although it doesn't provide any details as to how this process should be managed.

Judging by the terminology used in calling for "credible, inclusive and non-sectarian governance", it can be inferred that the patriotic opposition and the Kurds will both have seats at the negotiation table, and that the latter will probably push for a clause about autonomy or federalization, dependent on whether the SAA liberates Raqqa or the SDF does so instead, respectively. It's possible that the YPG will ask their fellow SDF Arab allies and other opposition groups to support their initiative, convincing them that they'll all achieve some sort of self-interested gain by weakening the unitary state.

Ultimately, however, the final arbiters on this will be the Syrian people, since UNSC Res. 2554 stipulates that a national election be held afterwards in choosing a new government. It's not clear from the text whether that means that there'll also be a referendum in deciding on the new constitution or not, but at the very least, Syrians will have the chance to vote for their representatives and use this opportunity to signal their support or disagreement with the post-conflict political process up until that point.

If history is any indication, then they'll overwhelmingly vote once more for President Assad, but there's no precedent for gauging how they'd respond to any prospective federalization or autonomy proposals, especially as regards the Syrian Kurds. No matter what they decide upon, the UNSC has already signaled through the aforementioned resolution that they'll support their choice, meaning that both the US and Russia could possibly end up recognizing Kurdish autonomy in northern Syria and crossing Erdogan's infamous red line.

The reason that Erdogan is so afraid of the Kurds gaining autonomy in Syria is because he knows that it would have an immediate demonstration effect on the ones that are living in his country. While nobody can accurately say what will happen in Syria next year, if its citizens do in fact end up voting for a government that allows for an autonomous Kurdish entity, then it could possibly symbolize a peaceful resolution to whatever outstanding political-territorial disputes that the Kurds might have with Damascus in a post-Daesh environment. Accordingly, it would also set a precedent for how Turkey could responsibly approach the issues that it has with its own Kurdish minority.

Crying Wolf: Ankara Adopting 'Terror' Methods in War Against Kurds
Erdogan wouldn't ever let this happen, though, since he's paranoid that autonomy is just a euphemism for full-fledged independence. His problem with the Kurds also stems from the fact that they are awakened to their identity separateness from the Turkish state, and if this is codified in any political form, he believes that it would lead to other similarly aware minorities following suit with their own pro-autonomy campaigns and eventually undermining the earlier political-identity cohesiveness of the country.

Mideast expert Ghassan Kadi wrote back in October that "Turkey is an amalgam of cultures and races and a long history of ethnic rivalry and remnants of ancient empires", and that "the Turkmans had the upper hand leaving other races (Halks, as referred to in Turkish) in a disadvantageous and rather disgruntled position." He also noted that "it is not surprising and unusual at all therefore to hear in Turkey the reference to the term "Turkish Halkler" meaning "The Turkish Peoples" rather than "people"; a term that indicates divisions and underlies danger if and when those different "Halks" are in combat with one another."

It's this precise scenario that Erdogan is so frightened of, perhaps figuring that the Alawites in Iskenderun (nowadays "Hatay Province" but formerly part of Syria before 1938) and other minorities might advocate for their own autonomy afterwards that would lead to the eventual unraveling of the contemporary Turkish state. This in turn demonstrates that the country's identity unity is a lot more fraught than most people think, but at the same time, there's nothing inherently negative about the central government loosening the screws a bit.

If Germany can be a devolved federation of identity-similar individuals, then there's no reason why a unity state of identity-dissimilar ones like Turkey can't decentralize for peace's sake. The only thing standing in the way is Erdogan's personal hatred for all those who oppose him, and his radical Muslim Brotherhood ideology that drives him to obsessively seek the enforced Islamization of this traditionally secular people, a task which could never be accomplished if they acquire autonomy. Erdogan will probably never come around to thinking differently, but hopefully whoever comes after him will realize that this is the only feasible way to solve the Kurdish Conundrum.