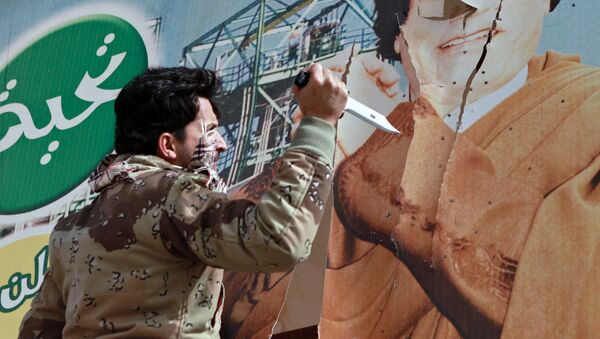 The new Libyan government formed under the auspices of the UN is unable to stop the chaos and turmoil in the country, a European Parliament lawmaker told Sputnik.

Gaddafi's Grim Prophecy Comes True: Countless Refugees Swarm Europe
The situation in Libya, which remains embroiled in a civil war which has already lasted five years, demonstrates the failure of NATO efforts to play the role of the UN, Spanish member of the European Parliament Javier Couso told Sputnik.

The military operation against the government of Muammar Gaddafi was launched in Libya on March 19, 2011. Shortly after, NATO was fully in charge of the operation. It ended on October 31, 2011.

"Five years have passed, and now we are witnessing absolute chaos on all levels in Libya. This is the failure of NATO efforts to replace the UN," the politician said.

According to him, the new national unity government formed under the UN auspices cannot reverse the negative trend.

"The agreement was not consolidated, and the country keeps living in chaos which is provoked by clashes between militant commanders supported by different foreign and regional powers," Couso underscored.

New Battlefront: Daesh in Libya Threatens Europe’s Underbelly
Earlier it was reported that a 13-member consensus government has been finally formed in Libya.

The peace talks began on March 6, 2015, amid intermittent clashes between two rival governments and Islamist fighters. On February 8, the country's Presidency Council said it needed another week to name a truncated list of cabinet members after rejecting a 32-member government last month.

Ever since Gaddafi was toppled and killed in an armed conflict in 2011, the county has been engulfed in a deep crisis.

The country is currently ruled by two governments: a nationally-elected parliament in Tobruk, in eastern Libya, and the General National Congress in Tripoli. At the same time, some parts of the country are not controlled by the government: they have been seized by armed militant factions, including Daesh.