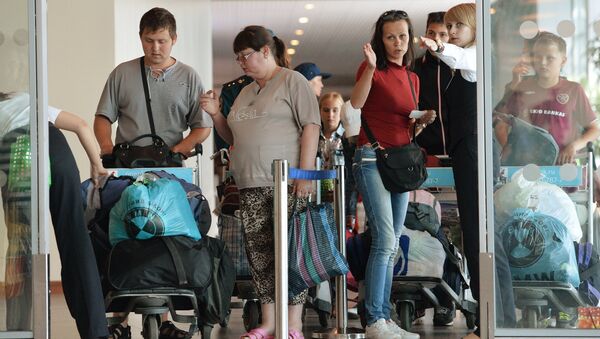 © Sputnik / Alexey Kudenko
/
Go to the photo bank
Subscribe
According to Russia's Federal Migration Service Deputy Head, over 1.36 million Ukrainian citizens have arrived in Russia since the start of the conflict in eastern Ukraine in 2014.

"Since 2014, 1.361 million people have applied to have their legal status [in Russia] determined. They have been granted various statuses, which include temporary asylum for around 400,000. Russian citizenship has also been granted, as well as temporary stay, residence and work permits," Smorodin said during a meeting of the Russian parliament's Support Committee for the Southeast of Ukraine.

With a total of almost 2.5 million Ukrainians currently residing in Russia, around 1.1 million have come from Ukraine's war-torn southeastern Donbass region, Smorodin added.

The Ukrainian conflict began in 2014, when Kiev forces launched a military operation against local militias in the Donbass region. The operation was undertaken in response to local residents' refusal to recognize the new government in Kiev, which came to power earlier in 2014 after what they consider to be a coup.

The Donbass region was plagued with violence throughout 2015, with fighting between Ukraine's military and southeastern militias causing significant damage to residential areas and infrastructure. Dangers to civilians and humanitarian issues persist despite a ceasefire. UN figures estimate the toll of the conflict at over 6,000 dead and over 17,000 injured, with approximately 2.3 million people displaced.