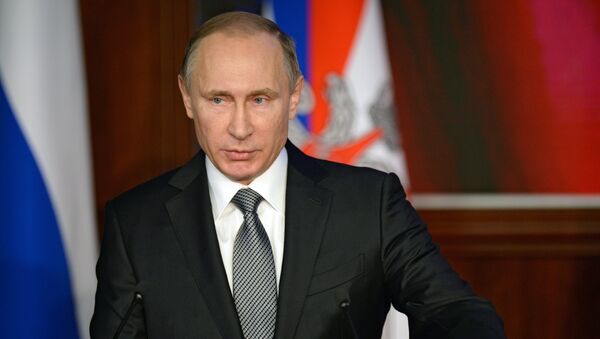 Finian Cunningham
All materials
The American and British governments are launching yet another media campaign to demonize Russia, with tall claims that the Kremlin is infiltrating European political parties and news media. The dastardly Russian aim, we are told, is to destroy the European Union.

Enigma of Charisma: Why is Putin Up for German Journal's Man of the Year?
We've already seen versions of this scare tactic with regard to Ukraine and "Putin the new Hitler". But what this yawn-inducing exercise illustrates is that the old former spell over the Western public held by their rulers no longer works. The opiate of Western propaganda has expired.

Never mind Russia. The EU has no-one else to blame for its present stresses and strains but itself, owing to its craven subservience to Washington's reckless policies.

Twenty-five years after the end of the Cold War and the dissolution of the Soviet Union, Washington and its trusty sidekick in London are desperately seeking to turn back the clock to the "good old days" when they could control their public through scare stories.

Recall those hoary old bogeyman themes of "Reds under the bed", the "Red menace", "Evil Empire", and so on, when the Western authorities mobilized their populations out of fear and trepidation that "the Russians are coming".

Europe’s Top Priority: Rehabilitate Russia for Its Own Sake
Looking back now, it seems amazing how this Western brainwashing managed to get away with such scare tactics. And to a large degree it worked back then. It allowed the US and its NATO allies to build up a huge arsenal of nuclear weapons that could annihilate the planet many times over; it permitted the US in particular to militarily interfere in dozens of countries all over the world, subvert their governments and implant brutal dictatorships — all on the pretext of defending the "free world" against "evil Russians".

Last week, we got a reprise of the Cold War brainwashing formula. Britain's Daily Telegraph, a notorious purveyor of psychological warfare, ran a report which cast Russia and President Vladimir Putin as a malign specter trying to break up European unity by "funding political parties" and "Moscow-backed destabilization".

The newspaper, mockingly known as the "Torygraph" because of its deep links with Britain's rightwing political establishment, quoted anonymous British government officials as saying:

"It really is a new Cold War out there. Right across the EU we are seeing alarming evidence of Russian efforts to unpick the fabric of European unity on a whole range of vital strategic issues."

It was also reported in the same article that the American Congress has ordered James Clapper, the US National Intelligence Director, to "conduct a major review into Russian clandestine funding of European parties over the last decade."

European political parties suspected of alleged Russian manipulation include Britain's Labour party under Jeremy Corbyn, France's National Front led by Marine Le Pen, as well as others in Netherlands, Hungary, Italy, Austria and Greece, according to the Daily Telegraph.

Not one scrap of evidence was presented to substantiate the story of alleged Russian conspiracy to destabilize European politics. Typical of old Western Cold War propaganda dressed up as "news" the accusations leveled against the Russian government relied on innuendo, prejudice and demonization. Russia and its leader Vladimir Putin are "malign" because, well, er, we say they are "malign".

What's really going on here is that the European Union is indeed straining at the seams because massive numbers of ordinary citizens have become so disillusioned with the undemocratic monstrosity. That disaffection with the EU applies to voters of both rightwing and leftwing parties.

Economic policies of unrelenting austerity, rising unemployment and poverty, and draconian cutbacks in public services — while banks, corporate profits and a rich minority keep getting richer and richer — has alienated vast swathes of the EU's 500 million population.

The EU's political leadership, whether called Conservative, Liberal, Socialist or whatever, has shown itself to be impotent to create more democratic policies and meet the needs of the public. In the eyes of many Europeans, the established political parties are all the same, all slavishly following a form of capitalist welfare for the already super-rich.

On the Verge of Collapse? 'Europe Without Borders' is Losing Its Appeal
A big part of the problem is that the EU has shown no independence from Washington. The European governments under the harness of the American-led NATO military alliance have blindly joined the US in its disastrous, illegal wars for regime change in Afghanistan, Iraq, Libya and Syria. Those wars have in turn rebounded to bequeath Europe with its worst refugee crisis since the Second World War.

Compounding the hardship is the totally unnecessary and futile standoff between Russia and Europe over the Ukraine crisis. European farmers, businesses and workforces are suffering on account of Washington and Brussels' policy to have destabilized Ukraine in order to isolate Russia for some geopolitical agenda. On this score, the European governments are especially execrable, since it should be clear that Washington wants to isolate Russia for its own self-interest of displacing Russia as a major energy supplier to the continent. Talk about shooting yourself in the foot.

Given all these strands of trouble it is no wonder that European citizens are discontent with their so-called political leadership. The popular contempt for Brussels has grown to record levels, and rightly so.

Why Poland 'Should Not Try Merkel’s Patience'
Europe's pathetically servile deference to Washington's economic and foreign policies is manifesting in forms of protest and dissent towards the entire EU project. The rise of Poland's rightwing, nationalist ruling party is another sign of the times.

But rather than facing the music for the widespread discontent across Europe, what Washington and its pro-Atlanticist allies like Britain are trying to do is make Russia the scapegoat.

To that end, the US and Britain are re-launching the old Cold War epithets to demonize Russia as a way to distract from their own malign and destructive influence on the rest of Europe.

UK to Fast-Track Snooping Bill as Ex-MI6 Chief Warns of Terror Risk
Decades ago the anti-Russian vilification may have worked on the public. Especially when Western news organizations and their CIA, MI6-infiltrated "journalists" enjoyed an effective monopoly over public opinion. Those days are over. The Western public are no longer under the sway of scary stories like little children. There are many alternative information sources out there for them to avail of in order to obtain a more accurate picture.

And that accurate picture of European problems does not fit with alleged Russian malfeasance. Rather, the malfeasance is plentifully ascribed to Washington and its lackey European governments.

The attempted rewind of the "red scare" by Washington and London can be easily dismissed for sure. But the interesting thing is that it betrays a deep sign of how these two actors have run out of propaganda ideas with which to distract increasingly restless and angry Western populations.

The people want real solutions to mounting social and economic problems, not stupid scare stories that expired decades ago. The more that the Western public is insulted by such nonsense the more contempt they have for their rulers. The Western capitalist powers, bankrupt and impotent, are at a dead-end. Bring it on.