UN Syria Envoy to Meet with UNSC Ambassadors in Geneva on Jan. 13 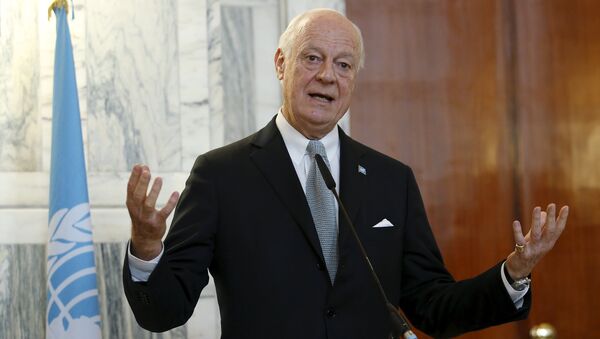 UN Special Envoy for Syria Staffan de Mistura will discuss the situation in the war-torn country with ambassadors from five UNSC permanent members.

Russia-US-UN Talks on Syria to Be Held January 13 in Geneva
GENEVA (Sputnik) — UN Special Envoy for Syria Staffan de Mistura will discuss the situation in the war-torn country with ambassadors from five UN Security Council permanent members in Geneva on January 13, a spokesman for the UN Office in Geneva said Tuesday.

"The Special Envoy of the Secretary-General for Syria, Staffan de Mistura, will meet Representatives of the five Permanent Members of the Security Council ("the P5") in Geneva tomorrow, Wednesday 13 January 2016," Ahmad Fawzi said.

"The meeting will be held at Ambassadorial level and will take place at the Palais des Nations," Fawzi added.

On Monday, Russia's permanent mission at the United Nations' Geneva office announced that trilateral Russia-US-UN consultations on Syria would be held in Geneva on January 13 as well.

The trilateral meeting will take place ahead of direct intra-Syrian talks, scheduled for January 25.

Syria has been mired in civil war since 2011, with forces loyal to President Bashar Assad fighting against numerous opposition factions and extremist groups, and needs a diplomatic settlement of the crisis.