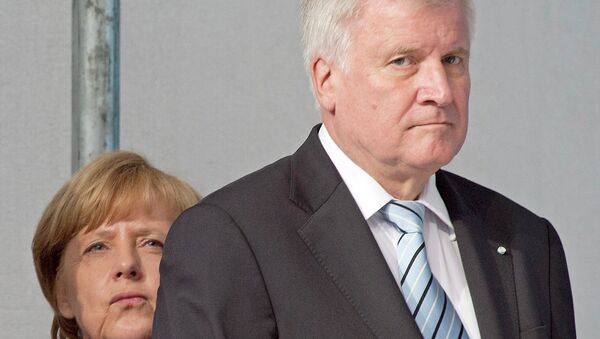 German politicians do not seem to enjoy much freedom of expression without being severely criticized by their counterparts.

For instance, Bavarian politician Seehofer was labelled by SPD-politician Markus Rinderspacher as "an accomplice of Putin's plans" only for pointing out the negative affect of anti-Russian sanctions.

Bavarian PM Urges Anti-Russia Sanctions Revision, Deescalation of Tensions
Earlier Seehofer called for the abolition of the anti-Russian sanctions in defense of German businesses, which have significantly suffered under the restrictions.

"Sanctions are doing enormous damage to the Bavarian economy and the national economy," Seehofer said earlier this month.

Rinderspacher criticized Seehofer's upcoming trip to Moscow in February and accused him of "servile obedience" to Russian President Vladimir Putin. The SPD-politician also called Seehofer's actions a "step in Merkel's back" and labelled the upcoming meeting with Moscow authorities a "brotherly kiss of the capitalists."

The European Union imposed sanctions on Russia’s main economic spheres – energy, defense and banking – after the start of the Ukraine conflict in spring 2014. In December, EU leaders extended them for 6 more months.

According to German media, anti-Russian sanctions have negatively affected German companies and caused widespread criticism among German entrepreneurs. During the first nine months of 2015 exports to Russia declined by 27%, to 3.58 billion euros.