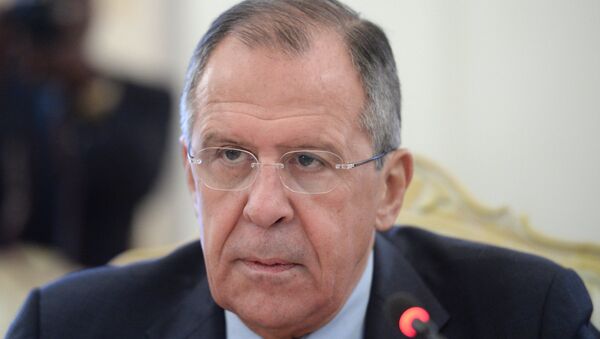 Lavrov thus described the US-led coalition's position on what is going on in Syria and Iraq: “Well, the Iraqis invited us to move in and we like Iraq, but we are still trying to tell them what is right and what is wrong…  As for Syria, it is a dictator, its days are numbered and we’ll keep bombing it without asking for permission from anyone. This is exactly what the Turks are now saying too,” he told the Moscow-based Zvezda television channel in an interview.

“If it hadn’t been for this high-nosed attitude by the US-led coalition in Syria, which always knows where the terrorists are and whom to bomb without asking anyone, Turkey would have never acted so arrogantly in Iraq,” Lavrov added.

Lavrov: US Belief in Being Exceptional Nation Hampers Anti-Terrorism Fight
According to the Iraqi authorities, on December 4 a 150-strong Turkish military contingent, backed by tanks, entered the country’s Nineveh Province under the pretext of training Kurdish Peshmerga militia fighting the terrorists.

The Iraqi foreign and defense ministries condemned Ankara’s move  as a “hostile act” and a violation of the country’s territorial integrity.

A US-led international coalition has been conducting airstrikes against Daesh in Syria since 2014, without the approval of the UN Security Council or the Syrian government.

In September 2015, Russia launched its own air campaign at the request of Syrian President Bashar Assad.