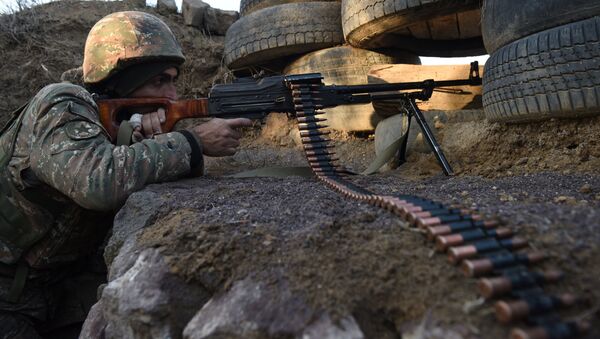 The conflict between Armenia and Azerbaijan began in 1988, after the predominantly Armenian Nagorno-Karabakh autonomous region announced its secession from the Azerbaijan Soviet Socialist Republic. Nagorno-Karabakh proclaimed its independence in 1991, prompting a war that lasted until a Russia-brokered ceasefire was signed in 1994. In September 2015, the conflict escalated with the sides blaming each other for violating the truce.

"We are greatly concerned about the situation in the Caucasus, especially in connection with the Karabakh conflict, where on the contact line heavy weapons, tanks are used, there are casualties," Bordyuzha said in an interview to Rossiya-24 television.

He added that political resource of the CSTO states should be used to prevent further destabilization of the situation.

"To ensure that this conflict, that is already in a fairly hot stage, does not turn into a large-scale military clashes," Bordyuzha stressed.

The CSTO is an intergovernmental military alliance formed in 1992 with six members at present: Russia, Tajikistan, Kazakhstan, Kyrgyzstan, Armenia and Belarus, as well as two observer states – Afghanistan and Serbia.

000000
Popular comments
Hopefully they can find a way to peace because in war everyone loses.