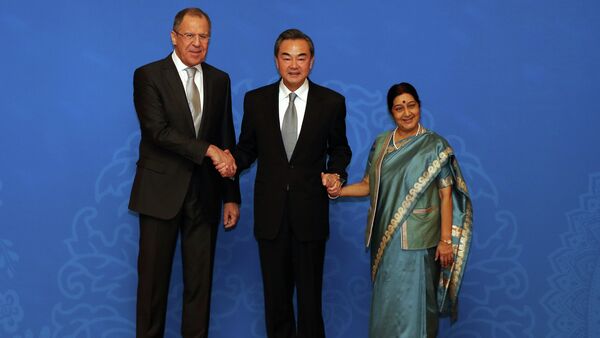 According to an Indian lawmaker, united Russia, India and China can influence the course of global development.

NEW DELHI (Sputnik) – The cooperation between Moscow, New Delhi and Beijing can affect the global course of development, National Secretary of the Communist Party of India Shri D Raja told Sputnik on Tuesday.

"India-Russia-China means it is very big force to influence the course [of] development globally," Raja said.

According to Raja, Russia has been playing "a very positive role" in Asian affairs.

"Even with South Asia, Russia has a role to play," Raja said.

India May Buy Over $7Bln's Worth of Arms From Russia During Modi's Visit
Moscow, Beijing and New Delhi currently cooperate within the framework of BRICS, an economic bloc comprising Brazil, Russia, India, China and South Africa.

Russia and China are both members of the Shanghai Cooperation Organization (SCO), a regional political and economic bloc. India's application to join the SCO was accepted in July but the country will only officially accede to the organization after it completes all required procedures.

The parliament member also stated that Moscow and New Delhi should cooperate on the resolution of global issues, including the settlement of conflicts in Afghanistan and Syria, and the Israeli-Palestinian tensions.

According to Raja, India and Russia have one of the best relationships among the world’s countries.

The statement comes just days before Indian Prime Minister Narendra Modi is scheduled to visit Moscow on December 24-25. According to Raja, Modi’s visit will help further improve bilateral relations between the countries.

Russia and India have enjoyed mutually beneficial strategic relations, especially in the field of defense and military cooperation, since the 1960s. Russia is among India’s foremost weapons suppliers. Over two-thirds of the Indian Army, Air Force and Navy military equipment is Russian- or Soviet-made.