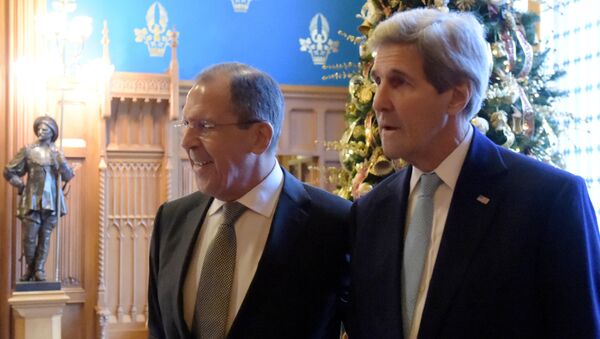 © Sputnik / Eduard Pesov
/
Go to the photo bank
Subscribe
Meetings in Moscow between President Putin, Foreign Minister Lavrov and US Secretary of State Kerry have led to significant progress in uniting their approaches to the regulation of the Syrian crisis, according to German Economic News (DWN).

Kerry Visit Signals Shift in Russia-US Relations
Discussions in Moscow between Russian President Vladimir Putin, Foreign Minister Sergey Lavrov and US Secretary of State John Kerry have made significant headway towards a mutual understanding of the problems facing Syria, according to German Economic News (DWN).

"Despite our countries' differences, we've demonstrated that when the United States and Russia pull together in the same direction, progress can be made," Kerry said following the talks.

"On ISIL, or Daesh, Russia and the US agree that this is a threat to everybody, to every country, that there is no negotiation, these are the worst of terrorists."

Russian Foreign Minister Lavrov said that the meetings were focused on the settlement of the ongoing conflict in Syria, which he linked to intensifying counterterrorism efforts.

"Jabhat al-Nusrah and other terrorist groups are a common threat to every one of us, and today, we reiterated our determination to uproot this evil," said Lavrov.

Lavrov Says Rejection of UNSC Resolution on Syria 'Unlikely'
The agreement between the US and Russia to consider the al-Qaeda-linked al-Nusrah Front a terrorist group is an important step in the light of calls from the US and Turkey to consider the militants a possible 'moderate opposition' to the Syrian government, DWN wrote.

"The meeting brought the amazing agreement that in addition to IS (Daesh) the al-Qaeda offshoot al-Nusra Front is a terrorist group," remarked the newspaper.

"The, at least, formal renunciation by the US of al-Nusra is also related to the fact that US President Obama signaled some time ago that the fall of Syrian President Bashar Assad is no longer the most important aim to maintain."

"Kerry said that the focus was not on Assad's role, but on the political process. The question closely follows: which of the rebel groups should and should not participate in the peace process. So there was agreement that IS radicals and the al-Nusra Front should not be allowed to sit at the table."

DWN noted another success from the meeting: the agreement to convene a sitting of the UN International Syria Support Group on Friday. After that, it is hoped the group's members will submit a draft resolution to the Security Council to reaffirm all the principles enshrined in the Vienna documents of October 30th and November 14th.