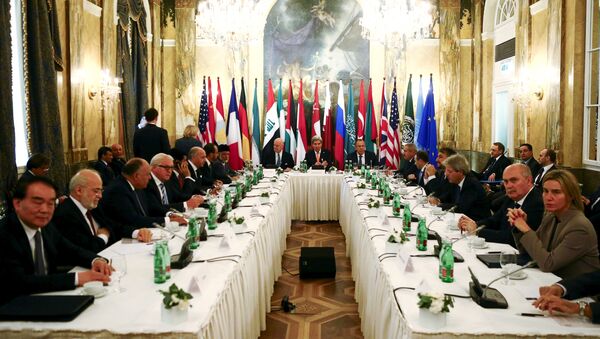 "We need Russia at the negotiating table, we need Turkey, Iran and Saudi Arabia. The settlement process will be long," she told reporters.

Germany Shells Out €134 mln to Join Anti-Daesh Coalition
The purpose of the Bundeswehr's participation in the military campaign against the Islamic State (IS, or Daesh in the Arab world) jihadist group in Syria is the prevention of terrorist attacks around the world, German Defense Minister Ursula von der Leyen said Thursday.

On Tuesday, the German government approved operations by its troops against Daesh in Syria. The German parliament is set to vote on the matter on Friday.

"As for our purposes, it comes down to the fight against Daesh (IS), to the destruction of camping sites and to depriving militants of the possibility to carry out terrorist attacks in the world," the minister said at a briefing in Berlin.

She added that "Germany has a keen interest in the regional situation settlement."

Von der Leyen added that the experience of Germany's limited participation in the antiterrorist coalition in Syria has been successful. She recalled that German military instructors in Iraq had been engaged in training the Kurdish Peshmerga forces, "successfully fighting" in Syria, for over a year.

The mission against Daesh, a violent religious extremist group outlawed in Russia and many other countries, will involve up to 1,200 German troops. The German Armed Forces plan to engage several Tornado reconnaissance combat aircraft and a frigate to support the French aircraft carrier Charles de Gaulle in the Mediterranean Sea. An aerial refueling aircraft, satellite reconnaissance and headquarters staff will support the mission.

Syria has been mired in a civil war since 2011, with the country’s government fighting against several opposition factions and extremist groups.

Representatives of Russia, Turkey, Iran and Saudi Arabia convened in Vienna in October to discuss the Syrian settlement and worked out a nine-point plan on ending the ongoing Syrian civil war. The plan includes the definition of national unity, the defeat of extremist groups and assistance to refugees.

The last round of Syria talks in the Austrian capital of Vienna took place on November 14 The participating states set a six-month timeframe for Syria to form an interim unity government, whereas elections in Syria should be held within 18 months.

000000
Popular comments
"We need Russia at the negotiating table, we need Turkey, Iran and Saudi Arabia. The settlement process will be long," she told reporters. The only people needed at the negotiating table are Syrians. Russia and Iran are needed to keep Turkey, Saudi, Qatar, Germany, UK, US, France et al away from the negotiating table.
dvdgrg09
3 December 2015, 16:42 GMT
000000
Remove Saudi and Turkey and it will work just fine. Include them especially Turkey and you are asking for trouble.
Tactical Investor
5 December 2015, 14:09 GMT
000000
Newsfeed
0
New firstOld first
loader
LIVE
Заголовок открываемого материала
Access to the chat has been blocked for violating the rules . You will be able to participate again through:∞. If you do not agree with the blocking, please use the feedback form
The discussion is closed. You can participate in the discussion within 24 hours after the publication of the article.
To participate in the discussion
log in or register
loader
Chats
Заголовок открываемого материала
Worldwide
InternationalEnglishEnglishMundoEspañolSpanish
Europe
DeutschlandDeutschGermanFranceFrançaisFrenchΕλλάδαΕλληνικάGreekItaliaItalianoItalianČeská republikaČeštinaCzechPolskaPolskiPolishСрбиjаСрпскиSerbianLatvijaLatviešuLatvianLietuvaLietuviųLithuanianMoldovaMoldoveneascăMoldavianБеларусьБеларускiBelarusian
Transcaucasia
ԱրմենիաՀայերենArmenianАҧсныАҧсышәалаAbkhazХуссар ИрыстонИронауОssetianსაქართველოქართულიGeorgianAzərbaycanАzərbaycancaAzerbaijani
Middle East
Sputnik عربيArabicArabicTürkiyeTürkçeTurkishSputnik ایرانPersianPersianSputnik افغانستانDariDari
Central Asia
ҚазақстанҚазақ тіліKazakhКыргызстанКыргызчаKyrgyzOʻzbekistonЎзбекчаUzbekТоҷикистонТоҷикӣTajik
East & Southeast Asia
Việt NamTiếng ViệtVietnamese日本日本語Japanese中国中文Chinese
South America
BrasilPortuguêsPortuguese
NewsfeedBreaking
00:26 GMTTrump Keeps Mt. Rushmore Sculpture With His Face on It on Display in His Office
00:01 GMTA Glimpse of Hope: Biden Approval Rating Climbs 2 Points, But Still Scores Low on Economy - Poll
YesterdayAbbott Says Texas Is Ready For Possible Cold Winter Due to ‘Dozen Laws’ Signed
YesterdayBarnier Says France Has to 'Be Ruthless With the British' Amid Migrant Crisis - Report
YesterdayEx-Labour Leader Corbyn Slams 'Irrational' Suspension From Party One Year On
YesterdaySudanese Army Repels Attack by Ethiopian Troops With Casualties on Both Sides
YesterdayWHO Says No Need for Panic Over Omicron Coronavirus Strain as Much Remains Unknown
YesterdayBiden's First Christmas Tree Will Reportedly Cost Taxpayers $139,000
YesterdayMemes Flood Twitter After WHO Dubs New Covid Strain Omicron
YesterdayOmicron Coronavirus Strain May Already Be in US, Going to Spread 'All Over', Fauci Says
YesterdayNCT 2021 Walks Into a Dream in New Teaser Video 'Year Dream: Stage 2 - Surfing in Our Dreams'
YesterdayWHO Confirms Some Guesses on Why It Skipped Two Letters and Named New COVID Variant 'Omicron'
YesterdayFrance Mulls Autonomy for Caribbean 'Confetti of Empire' Amid COVID-19 Rule Protests
YesterdaySolomon Islands Gripped by Anti-China Protests as US Keeps Largely Mum
YesterdayRussia is Not Going to Attack Anyone, Ambassador to US Says
YesterdayWhy Washington's 'Russian Invasion' Scare is Cover for Kiev's New Offensive Against Donbass
YesterdayActor Seth Rogen Mocked Online For Downplaying Crime in Los Angeles
YesterdayUK PM Orders Travel Quarantine and Mask-Wearing to Combat COVID-19 Omicron Variant
YesterdayBiden Reminded of Attack on Trump for African Travel Ban He Now Emulates
YesterdayGamaleya Center Says COVID-19 Antibody Drug Will Not Be Available Earlier Than Late 2022