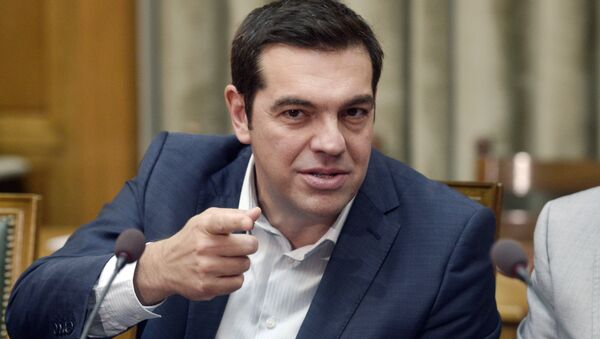 Greece Excludes Establishing Joint Border Patrols With Turkey
MOSCOW (Sputnik) – The Greek prime minister referred to a Russian Su-24 bomber that was downed on November 24 by an air-to-air missile fired from a Turkish F-16 fighter as a response to an alleged violation of Turkish airspace. The Russian General Staff and the Syrian Air Defense Command confirmed that the Su-24 never crossed into Turkish airspace, and was downed on Syrian territory.

“To [Turkish] Prime Minister [Ahmet] Davutoglu: Fortunately our pilots are not as mercurial as yours against the Russians,” Tsipras posted to his Twitter account on Sunday.

The Greek prime minister wondered how Turkey can spend billions of dollars patrolling and protecting its airspace, but cannot manage the flow of pedestrian migrants at its borders.

“We have the most modern aerial weapons systems – and yet, on the ground, we can't catch traffickers who drown innocent people,” he posted on Twitter.

On Sunday, Turkey signed an agreement with the European Union at a summit in Brussels. According to the document Turkey will manage the flow of migrants to Europe in exchange for some 3 billion euros ($3.18 billion) in aid and the restoration of EU accession talks.

The European Union is currently struggling to manage a massive refugee crisis, with hundreds of thousands of migrants fleeing conflict-torn countries of Middle East and North Africa in search of safety and refuge in Europe. Turkey is a key transit country for Middle Eastern refugees moving north. Approximately 160,000 migrants arrived in Greece from Turkey in October alone, according to the International Organization for Migration.