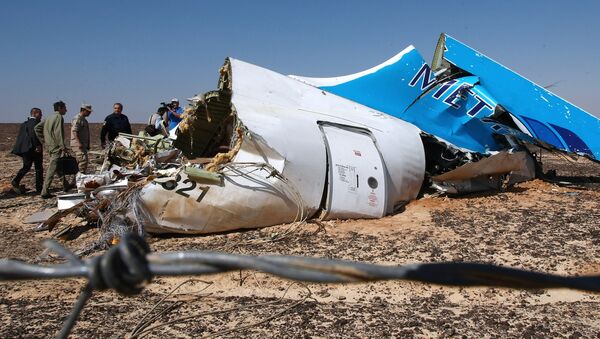 © Sputnik / Maxim Grigoryev
/
Go to the mediabank
Subscribe
International
India
Africa
An explosion of the homemade bomb of up to 1kg of TNT equivalent was the cause of the A321 crash in Sinai, Russian Security Service (FSB) head Alexander Bortnikov said.

“According to our specialists’ assessment, a homemade explosive device with an equivalent of 1 kilogram of TNT on board the aircraft exploded, which lead to the plane 'breaking up' in midair, which would explain the scattering of the plane’s fuselage across a wide area,” Bortnikov said during a meeting.

Russian Special Forces have determined the A321 passenger jet that crashed over Egypt’s Sinai Peninsula on October 31 killing all 224 on board was a terrorist act.

“We can definitely say this was a terrorist act,” Russian Federal Security Service head Alexander Bortnikov said during a meeting with Russian President Vladimir Putin.

Last Seconds of Airbus A321 Black Box Tape to Be Analyzed Outside of Egypt
An investigation into A321 crash shows traces of an explosive material in personal items and parts of the plane, Bortnikov added.

"Investigations have been completed on the personal belongings, baggage, and parts of the plane that crashed in Egypt on October 31. As a result of expertise conducted on all of the items, of which I mentioned, traces of foreign explosive material were exposed,” Bortnikov told the Russian president during a meeting on the official conclusion that the aircraft was exploded in mid-air by a homemade explosive device.

He also said that Russia offers $50mln for the information on those who might have been involved in the terrorist attack on the A321.

A Russian Airbus A321 with 224 people on board crashed on October 31 while en route from Egypt’s resort city of Sharm el-Sheikh to St. Petersburg, leaving no survivors. Various possible causes of the tragedy have been set out by aviation experts, ranging from a terrorist act to a technical glitch.